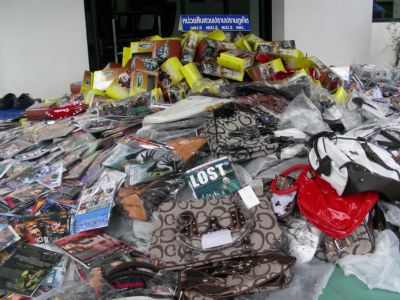 PHUKET CITY: Acknowledging the scale of the trade in counterfeit goods on the island, the head of the Phuket Customs Office has identified Patong as one of several “red zones” in the battle against pirated goods, the state-run Thai News Agency has reported.

Phuket Customs Office chief Sompong Onprasert said the problem was the worst in areas popular with tourists, such as Patong and Kata-Karon.

These areas have been designated as “red zones” in order to facilitate a crackdown and arrest those responsible for the trade in counterfeit goods and intellectual property rights infringement.

A total of six people were arrested for the sale of counterfeit goods in the month of January, it was reported.

For the problem to be solved in the long term, consumers would have to refrain from buying such products and respect intellectual copyright laws. Copyright infringement does great damage to the national economy, he said.

In a related story at the national level, the names of 41 police officers were included on a confidential list of people suspected of involvement in the pirated goods trade.

The list was presented to Prime Minister Abhisit by Deputy Commerce Minister Alongkorn Pollabutr on February 10.

Komkai murder suspect turns himself in