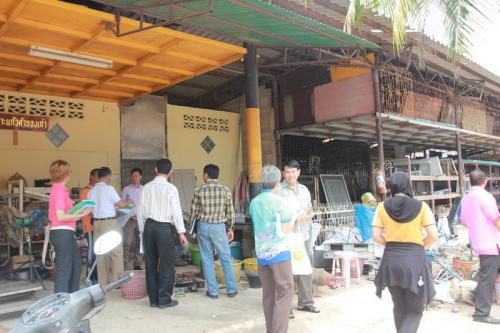 PHUKET: Traders dealing in secondhand goods and discarded items are under scrutiny in the latest campaign to keep the island green.

Officers from the Pollution Control Department are working with the regional Environment Office to ensure recyclables and heavy materials dumped at the stores are disposed of appropriately.

Surachai Kulthong, from the regional Environment Office headquarters, explained to the Gazette that 39 secondhand goods stores in Phuket were being inspected in a series of raids currently ongoing across the island.

“We need to educate and inform shop-owners how to keep their stores clean and tidy, and how certain items should be disposed of,” Mr Surachai said.

The store owners will be assessed in their current practices, and informed when those fall short of acceptable procedures, he explained.

“The idea is to educate the shop-owners so that they understand their role in reducing pollution, preserving the environment and reducing global warming,” Mr Surachai said.

Traders whose stores pass a second inspection at an undisclosed date in the future will be awarded a certificate, he added.

“There are more than 10,000 junk shops in Thailand, filled with too much broken, used and useless junk. This all affects the environment and the health of the people in surrounding areas, that is why we launched this project,” Mr Surachai said.

US Embassy to stage “outreach visit’ to Phuket