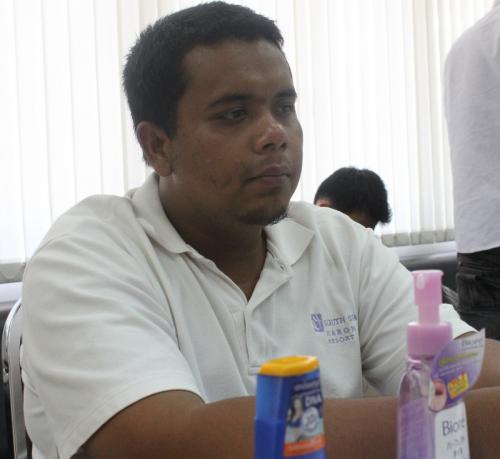 PHUKET: A Phuket taxi driver has confessed to beating and abducting a karaoke hostess before stealing her valuables and leaving her tied up in a Phuket hotel room.

However, he has denied the rape charge filed against him by the woman.

Phuket City Police arrested Suksan Mornamrong, 28, at his rented home in Koh Kaew for the alleged rape on Monday night of a woman who worked at a karaoke bar in the Rassada port area.

Suksan, originally from Krabi, was found in possession of stolen property belonging to the victim, including two mobile phones, 4,000 baht, two necklaces, an ATM card and her ID card.

The woman reported her ordeal to Thung Thong Police early Tuesday morning, recounting how she was abducted, beaten, raped and robbed by a taxi driver who drove a white Toyota Altis.

After the woman reported the license plate number of Suksan’s taxi, police quickly found his home address and within hours had him under arrest.

Speaking in front of the press on Tuesday, Suksan confessed to abducting and beating the woman, and to stealing the woman’s belongings.

“I picked the woman up from a karaoke bar in Rassada and took her to a hotel in Phuket Town to have sex, but I failed to climax so I beat her, then took her to another hotel in Thung Thong,” Suksan explained.

“While I was driving the car [to Thung Thong], the woman started choking me, so I bit her hand. After we arrived at the hotel, I was angry so I took her into the hotel room and beat her again,” he added.

“After that, I tied her up with rope and took her belongings, and asked her for the PIN code to her ATM card, before I went out to work. I had to take a tourist from Patong to the airport.

“After dropping the tourist off, I returned home [to Koh Kaew], where police arrested me,” Suksan explained.

After Suksan left the woman alone in the room, she screamed for help, alerting hotel staff to come to her assistance.

“The suspect was charged with sexual assault, robbery and abduction. He is now being detained at Thung Thong Police Station. He will be transferred to Phuket Provincial Court today for further detention,” said Thung Thong Police Deputy Superintendent Yodsaphat Suwannakij.

“We are now waiting for the results of the medical tests to confirm the woman was raped, then we will transfer the case to the Public Prosecutor for further action,” he added.