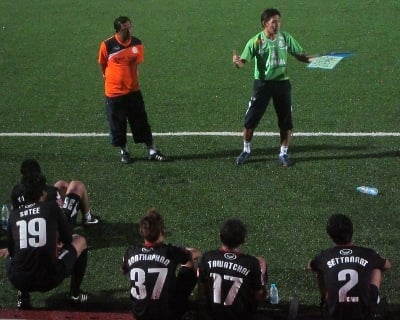 PHUKET: The Islander’s newly appointed head coach, Anuruck “June” Srikerd got his first chance to see his new side in action during a friendly match against a mixed Southern B-side last night.

Played on Thanyapura Sports & Leisure Club’s artificial-grass pitch, the friendly proved to be a much needed confidence boost for Phuket, who scored 5 unanswered goals against their opponents, comprising a mix of players from Division 2 side, Phanga FC as well as local Rajabhat University Phuket amateur players.

The informal friendly, played over four periods was spontaneously scheduled by Coach June, who took up his new post on Wednesday following the resignation of Coach Narong Ajarayutt a day before.

For full details of the resignation and new appointment, pick up a copy of the Phuket Gazette, out on stands tomorrow.

Coach June fielded two primary teams, who alternated onto the pitch in each of the four periods.

After landing at Phuket Airport on Wednesday, the new coach told a press conference: “My first priority is to get to know all my team to find out which players can play the systems the best. Then we have to work on building unity, pride and love in the team so we play as one.”

Despite a tough final run ahead to the end of the season, the Coach said he believes Phuket FC can earn 15 points from its remaining six matches, but will need to develop the right attitude.

In contrast to Phuket’s previous two head coach’s this season, Coach June, who last season led Southern rivals Pattalung to promotion from Division 2, was quite vocal and active in his command last night, constantly switching his orders between Thai and English to address both Thai and foreign players mistakes.

The coach reiterated to the team that regardless of their current standing (13th) or recent shortcomings, they still have a good chance to prevail against 3rd place Sri Racha on Sunday.

“The most important thing is that we need to play as one team. You can’t just look after your own role, but must also be able to step up and compensate for your team mates when they’re behind . Many of you are highly talented athletes, but that talent will mean nothing unless you play as a team and have the right attitude,” he concluded in the post-match pep talk, before asking the team to be in bed by 10pm, and up in the morning by no later than 7:30am.

The team is scheduled to commence training this evening at Surakul Stadium.

Sunday’s kick off against Sri Racha, also at Surakul Stadium, will be at 6:30pm.