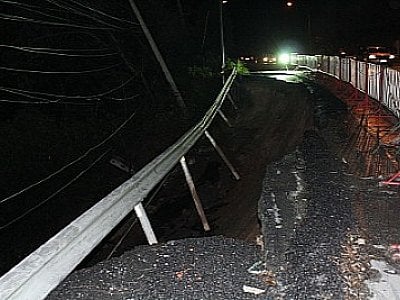 PHUKET: The section of road on Patong Hill that was washed away by heavy rain last year has suffered another landslide, in the same place, after days of heavy rain soaking Phuket this week.

Last night, the same site suffered another landslide, with the dislodged earth tumbling into a rubber plantation below.

Phuket Highways Department workers have marked the danger area with warning signs for motorists. Vehicles heading from Patong to Phuket Town can still pass, but the road at that location is yet again closed down to just one lane.

“We have to wait for the rain to stop before we can make temporary repairs. We will make permanent repairs later,” said Phuket Highways Office Director Samak Luadwonghat.

Governor Tri moved for the emergency budget as the road was deemed at high risk of collapsing due to the heavy annual monsoon-season rains.

It would be a challenging task for Thailand…