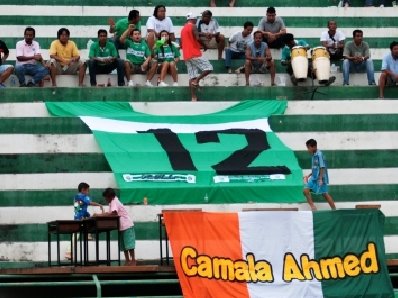 PHUKET: FC Phuket face a date with destiny on tomorow afternoon at Surakul Stadium when they take on Samut Prakhan in their final Thai League playoff game of the season. Kick-off is at 4pm.

The club currently sits in second place, a point behind table toppers FC Chainat and two ahead of FC Rayong who they defeated 2-0 on home turf last weekend.

Only the top two in Group B will be promoted to Division 1 for next season.

With Rayong clashing at home with bottom-of-the-table Loei City in their final game, nothing less than a victory for Phuket over Samut Prakhan will do. All Group B games will kick off simultaneously.

If Phuket fails to bag all three points, it becomes markedly more complicated to decide promotion.

A draw for Phuket and a win for Rayong will see the two teams finish the playoffs level on points. It will then go down to goal difference, where Phuket is currently one goal better off.

A Rayong victory coupled with a Phuket defeat will spell heartbreak for the green-glad “hulk” home support as they will miss out promotion.

Phuket and Samut Prakhan played out a scoreless draw earlier in the playoffs.

Phuket’s Tuptim given a fighting chance