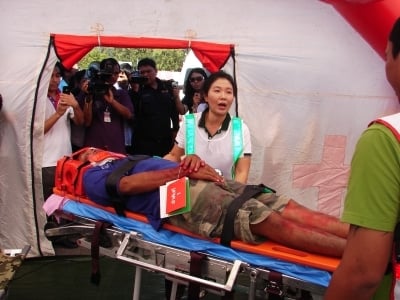 PHUKET: Scores of emergency rescue workers from all over Phuket took part in two hours of search-and-rescue drills at Saphan Hin this morning.

The drill was intended to improve the ability of staff to react in an effective and organized fashion in the event of a disaster by giving them practical experience using rescue equipment and coordinating efforts among the various agencies involved.

Participation was limited to emergency medical and rescue personnel, along with a small number of volunteers.

Phuket Governor Tri Augkaradacha presided over the 9am opening ceremony for the event, which saw training for numerous organizations including:

– Phuket DMAT (Disaster Medical Assist Team), which has units from all six hospitals in Phuket;

The drill followed a two-day training camp in “command post exercises” at the DDPM Academy in Phuket Town on Wednesday and Thursday.

The drills began with the remote sounding of the nearby National Disaster Warning Center (NDWC) warning tower.

Once the signal began, workers rushed to set up an operations center and field hospital using inflatable tent structures provided by the Red Cross.

Meanwhile, a team of Navy Seals used a helicopter to pluck a mock victim from the sea and to take him for emergency medical treatment.

PPHO Deputy Director Wiwat Seetamanotch said, “Our field hospital can be set up in just 15 minutes. With 10 beds it can handle about 200 patients a day. Victims requiring surgery or overnight treatment will be sent to hospital.”

The training continued this afternoon at Phuket International Airport, where a staging area and field hospital were set up to coordinate evacuation to medical facilities aboard a specially-equipped C-130 transport plane operated by the Royal Thai Air Force Institute of Aviation Medicine.

“The drill is based on the scenario that all six Phuket hospitals are too crowded to provide treatment for all who require it, creating a need to evacuate victims to facilities in partner provinces,” Dr Wiwat said.

“This time we asked for cooperation from Nakhon Sri Thammarat, which was undamaged from the [hypothetical] tsunami. In an emergency, patients will be airlifted by C-130 to field hospitals at airports in those provinces, then rushed to hospital for treatment,” he added.

The Nakhon Sri Thammarat unit is one of seven partners the Phuket unit can call upon in the event of an emergency. The others are provincial units in Chiang Rai, Udon Thani, Phetchaburi and Ayudhaya, as well as the Emergency Medical Institute and the Navy Medical Department, both in Bangkok, Dr Wiwat explained.

Under the terms of the MoU, these firms will provide emergency food and drink supplies within an hour of request. It is the first MoU of its kind signed anywhere in Thailand, he added.

Also at the event today was a high-tech emergency communications van belonging to the Ministry of Information and Communications Technology (MICT).

The MICT is currently developing communications and database technology to ensure an uninterrupted flow of information in Phuket in the aftermath of any disaster, Dr Wiwat said.

“The database system will allow us to search for appropriate agencies to handle any kind of disaster, such as chemical leaks or poisonous gas explosions. It should be completely ready by next year,” he said.

Wishing you a very Merry Christmas