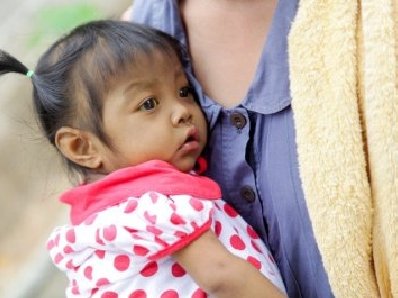 PHUKET: A fund-raising campaign that began in Phuket just over a week ago and spread around the globe could have saved the life of a seven-month old baby. (See stories here and here.)

Tuptim Jadngooluem – the only daughter of Rattanachai “Kru Nai”, a well known trainer at Tiger Muay Thai in Chalong – was diagnosed with a terminal liver condition known as biliary obstruction when she was three months old.

When Tuptim was admitted to the intensive care unit (ICU) of Ramathibodi Hospital in Bangkok last week suffering from internal bleeding, doctors did not offer much hope that she would see the new year.

She was in urgent need of a live-saving parental donor liver transplant – a complicated 18-hour surgery during which a portion of the parent’s liver is removed and placed inside the child.

Tuptim’s parents could not afford the 1.5 million baht for operation and faced the prospect of losing their daughter.

However, the rallying together of the Tiger Muay Thai community in Chalong saw a fund-raising committee set up to save Tuptim.

The effort soon gathered momentum and captured the imagination of the world earlier this week when Ultimate Fighting Championship (UFC) President Dana White agreed to pay for the operation.

Mr White came across a plea for donations to save Tuptim on a Mixed Martial Arts forum and confirmed he would pay the US$50,000 to cover the cost of the surgery.

The generosity of Mr White, coupled with the tireless efforts of the people at Tiger Muay Thai here in Phuket, now means Tuptim will get her operation on January 14.

The operation will be carried out by renowned Bangkok-based specialist Dr Sumate Teeraratkul, who has a better than 90 per cent success rate in performing the procedure.

Tuptim’s mother, Ms Nit, has been amazed by the number of people who have contributed to help save her daughter’s life.

“Before I had to worry about money. We have no money but me and Nai are very happy because many people have helped us and given us money to pay for everything in the hospital and pay for her surgery,” she said.

“Every time I go to see her in the ICU in hospital I hold her hand and tell her everything that has happened. I tell her about Mr White giving her big money for her surgery. I tell her she cannot die because everyone loves her in the whole world and that she is a special baby.

“This has happened so fast; in just one week we have got a new life for our baby, because without the surgery she would soon die. Everyone has worked so hard to try and get money for Tuptim. I say thank you but I know in my heart that it is not enough,” added Ms Nit.

Despite sufficient funds to cover the cost of the operation, Tuptim will require expensive medication for up to the next 10 years, so the fund raising will continue.

On Saturday evening a barbeque will be held at Tiger Muay Thai in aid of Tuptim.