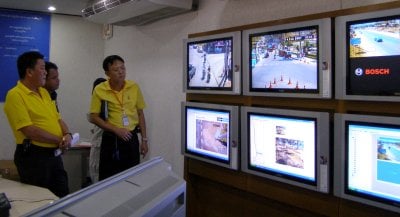 PHUKET: The next time you are having a night out on the town in Patong, Kata-Karon or Phuket City be sure to keep a smile on your face: you might be on TV.

Pol Col Peerayuth Karachedi, Superintendent for Administrative Affairs at Phuket Provincial Police Station, told the Gazette that a closed-circuit television (CCTV) system has been fully tested and is now operational in the three popular tourist locations.

Each of the three locales has 16 cameras linked to a command center at a local police station in Kathu, Chalong and Phuket City, respectively.

“All the equipment is ready, but we still need to make minor adjustments to optimize efficiency, such as by shifting camera angles slightly to maximize the area of coverage… but from our tests we can confirm that the system is up and running at all three locations,” he said.

About one week was spent testing the equipment in all three areas, he added.

The CCTV cameras can record data for up to 30 days before the data needs to be archived.

The ease with which the video images can be replayed and reviewed is expected to improve law enforcement capability, security and traffic control, he said.

By the end of February police officers in the respective command centers will begin a two-month training program in how to operate the system effectively. The course will be taught by engineers from project contractor Bosch Security System Thailand, Col Peerayuth added.

Cat Telecom will be given 10 more days to fine-tune the system to police requirements, after which time the police will sign off for final payment, he said.