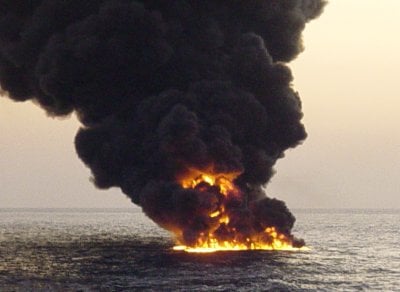 PHANG NGA: The captain of Thai fishing boat Muang Dam 2 was seriously injured and his First Mate killed on February 9, when nine Burmese crew members mutinied during a fishing expedition about 40 miles off the coast of Phang Nga Province.

After the incident was reported to the Royal Thai Navy Third Naval Area Command at Cape Panwa, two Thai Navy vessels were sent to hunt for the mutineers.

About 4 pm, the Navy patrol boats sighted Muang Dam 2 west of the Similan Islands and ordered the vessel to stop. The Burmese crew members, who were then in control of the boat, ignored the order. According to a Royal Thai Navy press release, they also then killed the boat’s Thai First Mate, identified only as K. Sri. The ship’s mechanic, whose name was not released, managed to jump ship and was later picked up by another vessel.

The mutineers then set the boat ablaze and abandoned ship. The Navy were able to detain two of the men, who were later handed over to police. The fate of the other seven remains unknown, a source at the Third Naval Area Command told the Gazette.

The incident was spurred by Burmese crew members taking offense at being scolded by the captain, the source added.

Captain Chalermporn was taken to Takuapa Hospital in Phang Nga Province to be treated for stab wounds to his left ear, right arm and chest.

Island CCTV up and running