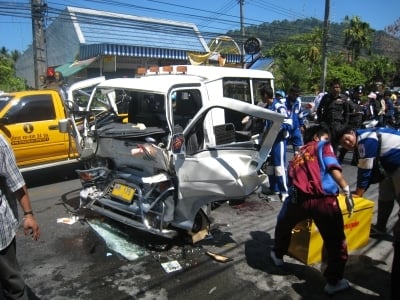 SAMKONG: A Finnish man and a Thai tuk-tuk driver were killed in a head-on collision between a tuk-tuk and a pickup truck shortly after 1 pm yesterday. A Finnish woman and Thai man traveling in the tuk-tuk were also injured in the accident.

The Finns were in the back of a tuk-tuk driving northbound past Steak Samkong restaurant on Yaowarat Rd when the accident occurred.

The Finn, identified as Eero Untamo Malim, was rushed to nearby Vachira Phuket Hospital, but was dead on arrival, a nurse in the emergency ward said.

Tuk-tuk driver Payao Junjue was still alive when he was cut out of his vehicle with “jaws of life” hydraulic cutting equipment, but died at Vachira Hospital about 4 pm.

Mr Malim’s companion, Raija Helena Engberg, was taken to Bangkok Hospital Phuket to be treated for a broken leg. A man traveling in the front passenger seat of the tuk-tuk also sustained a broken leg.

The driver of the pickup, Lanju Saechiw, was unharmed in the incident, said Phuket City Police Inspector Maj Sarit Butnongsang.

Police are still investigating the cause of the crash and have not charged anyone with a crime, he added.

A lovely day at the District Office

Island CCTV up and running