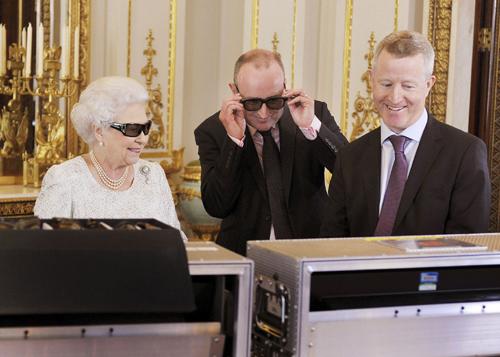 Queen Elizabeth goes 3D for Olympics tribute
Reuters / Phuket Gazette
PHUKET: Queen Elizabeth will use her traditional Christmas Day message, filmed in 3D for the first time, to pay tribute to the world’s athletes for delivering a “splendid summer of sport” at the London Olympics.

In her personal address to the nation, the monarch will pay tribute to the competitors’ “skill, dedication, training and teamwork”, her office said.

The 86-year-old head of state provided an Olympic highlight when she made a surprise comic turn with James Bond actor Daniel Craig in a short film for the opening ceremony.

“In pursuing their own sporting goals, they gave the rest of us the opportunity to share something of the excitement and drama,” she will say, according to advance extracts.

The Queen missed a church service at her country retreat yesterday due to a cold, Buckingham Palace said. Her message was pre-recorded and will go out as expected.

It comes at the end of a landmark year for the royal family.

The Queen marked 60 years on the throne with the Diamond Jubilee celebrations and her grandson Prince William and his wife Kate are expecting their first baby.

Prime Minister David Cameron issued his own Christmas message in which he talked of Britain’s “extraordinary year”.

“We cheered our queen to the rafters with the Jubilee, showed the world what we’re made of by staging the most spectacular Olympic and Paralympic Games ever and – let’s not forget – punched way above our weight in the medals table,” he said.

The first Christmas broadcast was given by Queen Elizabeth’s grandfather George V in 1932. It has become a Christmas Day tradition for many families to watch it together after lunch.

Clarke is doubtful for the Melbourne test starting on Boxing Day after a hamstring problem forced him to retire hurt while batting on the fourth day of Australia’s 137-run win in the opening match of the series in Hobart.

The 31-year-old batsman, who is the leading scorer in tests in 2012 with 1,489 runs, has repeatedly said he was confident of returning to fitness in time for the second test at the MCG but Inverarity was not sure it was worth taking the risk.

“He’s a very precious asset and I would go low risk,” Inverarity told reporters after watching Sunday’s training session at the MCG, in which Clarke underwent light duties.

“He’s always upbeat, he desperately wants to play. But we certainly don’t want to push him especially hard in a test and for him to break down.”

If Clarke fails to prove his fitness over the next couple of days, his place in the batting order could got to Usman Khawaja, while all-rounder Shane Watson will take over as captain.

Amazing opportunity
Watson said he could fully understand why Clarke was so keen to lead Australia in the Boxing Day test at the MCG.

“It’s just about as big as it gets for an Australian cricketer,” Watson said.

“… It’s an amazing opportunity to think that something like that has come along in your life.

“But I’m trying not to get too far in front of myself at the moment. I know Michael will be doing everything he can to get right for this test match.”

Australia have been forced to reshuffle their pace attack due to injuries and fatigue in recent matches and are set for another line-up change with Ben Hilfenhaus ruled out of the second test.

Left-armers Mitchell Starc and Mitchell Johnston, and the uncapped Jackson Bird are vying to join Peter Siddle in a three-pronged pace attack at the MCG, with selectors likely to retain off-spinner Nathan Lyon.

Inverarity confirmed that the selectors would continue with their rotation policy to preserve the fitness of the remaining bowlers and Starc was next in line.

“It’s about bowling loads,” he said. “The science behind it is that they’ve got to build up their bowling loads so the oscillations are not very significant.

“If they do become reasonably significant, as they have done for Mitchell (Starc), then you enter a danger period, a high-risk period.”

(Writing by Sudipto Ganguly in Mumbai; Editing by John O’Brien)


Messi ends 2012 with another goal as Barca march on
Reuters / Phuket Gazette
PHUKET: Unbeaten La Liga leaders Barcelona continued their record-breaking start to the season when Lionel Messi struck his 91st goal of 2012 in a 3-1 win at Real Valladolid on Saturday.

The victory at Valladolid’s Jose Zorrilla stadium was Barca’s 16th in 17 league matches this term and restored their nine-point advantage over second-placed Atletico Madrid, who won 1-0 at home to Celta Vigo on Friday.

Barca have a La Liga record 49 points for this stage of a campaign and are 16 ahead of champions and arch rivals Real Madrid who are third ahead of their game at fourth-placed Malaga later on Saturday.

Valladolid kept a dominant Barca at bay until two minutes before halftime when Messi, who earlier shook the frame of the goal with a free kick, played Jordi Alba through on the left and Xavi turned his low cross into the net.

Messi uncharacteristically fluffed a simple chance early in the second half but the Argentine World Player of the Year doubled Barca’s lead in the 59th minute with a trademark run and finish.

Xavi’s clever back heel set the Argentine on his way and Messi dinked the ball between a defender’s legs before firing a low shot into the far corner.

It was his 26th La Liga goal of the campaign and his 91st of 2012, extending the calendar year record he broke earlier this month when he overhauled Gerd Mueller’s 40-year-old mark of 85.

Javi Guerra pulled a goal back for Valladolid in the 89th minute before Cristian Tello added a third for Barca in added time moments after coming off the bench.

The Catalan club were without coach Tito Vilanova, who had surgery on his saliva glands on Thursday and was released from hospital only hours before Saturday’s game.

Assistant coach Jordi Roura has taken charge on a temporary basis until Vilanova is well enough to return.