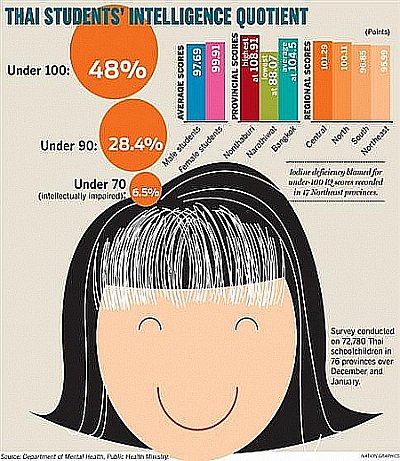 PHUKET: Phuket was among 14 provinces where students had a combined average IQ score above 100, according to the largest IQ survey ever conducted in Thailand.

Of 72,780 Thai students surveyed recently by the Ministry of Public Health, 6.5% nationwide suffered intellectual disability because their IQs were lower than 70, almost double the number of geniuses who scored 130 or above.

“Judging from global statistics, the number of children with below-70 IQs should not exceed 2%,” said Dr Apichai Mongkol of the Mental Health Department.

Students in the Northeast had the lowest average scores, with combined average of 95.99. In the South, students did a bit better, scoring 96.85.

On average, Northern students’ scores were 100.11 while students in Central Thailand achieved 101.29.

Students in Bangkok had average scores of 104.5. “But Bangkok students do not demonstrate the highest average IQ scores [by province],” Dr Apichai said.

“Their average scores are just the fourth highest in the country.”

By province, students in Nonthaburi were the brightest, scoring an average of 108.91. Next were students in Rayong with 107.52 and students in Lampang with 106.62.

Children in 20 other provinces had average IQ scores of 100.

Dr Apichai said he believed insufficient iodine intake was the main cause of the below-average IQs of children in these provinces.

To promote higher IQs, he said parents should express their love for their children, provide them with nutritious food and allow them to interact with nature.

“Let children play without restrictions because that will boost their creativity… In addition to that, parents should encourage their children to read, sing, and play sports,” he advised.

Chulalongkorn University lecturer Narongrit Asawaruangpipob said students in urban areas tended to have higher IQs than those in rural areas.

Drug task force to be posted at Phuket Airport