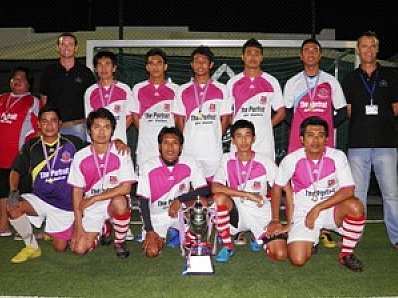 PHUKET: Season seven of Phuket’s Adult Futsal League (AFL) came to close last week with the final round of matches played out at Thanyapura Sports and Leisure Club (TSLC).

Home side Thanyapura SLC played first against SGS. TSLC scored after just two minutes following a frantic start to the game. SGS equalized on 13 minutes when Surapong made no mistake from close range. TSLC were forced to press forward and their efforts were rewarded with two goals in the four minutes before half-time from Sayan and Apiwat. A fourth TSLC goal immediately after the restart stunned SGS when Apiwat found the target for his second of the night.

With a three goal cushion and just nine minutes remaining, TSLC looked home and dry, but SGS had other ideas. A great individual effort from Duangdee gave SGS their second goal and sparked life into his team. On 35 minutes Surapong brought the deficit down to one goal and a dramatic last minute score, again from Surapong, ensured his hat-trick and a share of the points.

Thalang Tigers and Island Boys were next to challenge. Island Boys hoped to finish the season with three points and so the match was a close and hard fought affair. After 14 minutes Thalang broke the deadlock through Suripong. Island Boys were unable to find a way through in reply and two goals in quick succession from Thalang ended the first half with a score of 3-0. The second half proved just as frustrating for Island Boys, but in the 27th minute, Mark Lightfoot ran through the Tigers defense and beat the keeper to score and give his team an element of hope. Unfortunately, this was to be their only goal of the game as Thalang ran out 3-1 winners.

Having already secured the title, Portrait FC faced second place Jitjongrut FC in a match for bragging rights. The game was played in a friendly atmosphere as both teams were guaranteed their final positions prior to the match. Portrait took a 2-0 lead in to the break with goals from Veerachai and Kitti. The second half continued in much the same fashion with Jitjongrut moving the ball around well, and Portrait happy to prey on errors. Two more goals were scored by Portait in the final 15 minutes. The first by Somsak which helped win him the Golden Boot Top Scorer award with his 14th goal of the season and the second by Portrait’s captain, Sarayuth. Jitjongrut scored a last second consolation goal through Sukitti, but far too little and far too late gave Portrait three points and a 4-1 victory to emphasize their season’s domination of the AFL.

“The general level of play seems to increase with every season at TSLC and the Portrait FC squad of players performed highly week in and week out. The race for runners up medals went down to the last week. We are now busy looking for more Expat/Thai teams to compete in season eight of the AFL on Phuket,” said Martin Hill organizer of the AFL.

“TSLC is committed to hosting as many Sports events as possible for the local community and we are delighted to be working with the Adult Futsal League. We are also looking at making use of our all-weather full-sized Stadium Pitch for future AFL leagues,” said TSLC Director of Operations Giles Leonard.

Phuket to host regional seminar for the blind