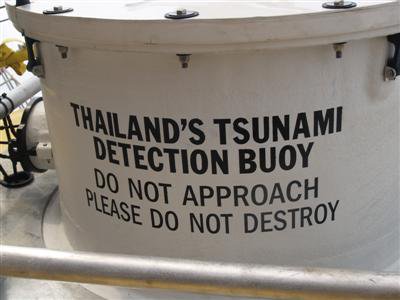 PHUKET: Thailand’s tsunami direct detection buoy has been successfully replaced and the new unit began transmitting data via satellite at 9:15am Thursday morning.

Staff of the National Disaster Warning Center (NDWC) and technical experts from the US who conducted the mission returned aboard MV Seafdec at 8am yesterday, as planned.

NDWC Director Viriya Mongkolveerapan told the Gazette the old unit will be sent to the US for maintenance and analysis.

The ‘Dart II’ unit, deployed in December 2006, was given to Thailand as a gift from the US government under the stipulation that the NDWC would be responsible for its routine maintenance, including an annual change of battery.

Due to bureaucratic obstacles, the NDWC never changed the battery and on September 11 this year buoy finally stopped transmitting.

Rather than perform maintenance at sea, the NDWC decided to buy a second Dart II buoy from the US and replace the existing unit so that maintenance and repairs on the original unit could be carried out on land.

The NDWC now plans to switch out the two units annually and deploy two more buoys closer to the Thai mainland shoreline by the end of 2010.

The agency is still considering whether to store the original buoy in Phuket or Bangkok after its returned from the US, Mr Viriya said.

The NDWC team will fly back to Bangkok later today, he said.