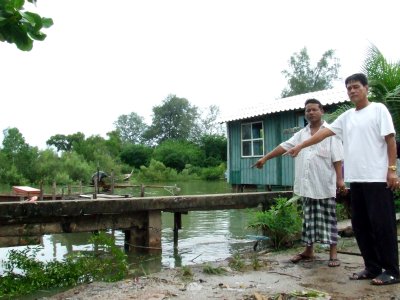 PHUKET: Residents at Haad Saen Suk in Phuket Town continue to petition City Hall to rebuild a broken seawall that once protected their homes from flooding at high tide.

Adun Yonjamrun, one of village leaders, said homes in the neighborhood flood every time heavy rainfall coincides with high tide.

The flooding is often at its worst in the morning, he said.

Some 200 people live in the affected area, built along a 200-meter dirt road beside an important drainage canal.

There has been extensive damage to a section of seawall that once protected about 50 nearby homes from flooding.

Mr Adun, who moved to Phuket eight years ago from his native Nakhon Sri Thammarat, said municipal officials had visited the community and seen with their own eyes what high tide does to their homes.

“They said they would discuss the matter with relevant officials, but we still haven’t had any word as to when the seawall would actually be repaired,” he said.

The entire area on which the community is built was once extensively mined for tin. Saphan Hin and surrounding coastal areas is built on “reclaimed” land, a legacy of tin mining days.

Tin mining sediment also covers the seabed of most of Phuket Bay, to a thickness of up to two meters in places. Phuket Bay had a sandy bottom before the tin mining era arrived.

The issue of climate change and its potential impact of the Phuket economy was the topic of a seminar held at the Phuket Merlin Hotel on Thursday.

For more information or a link to the readers’ forum debate it sparked click here.