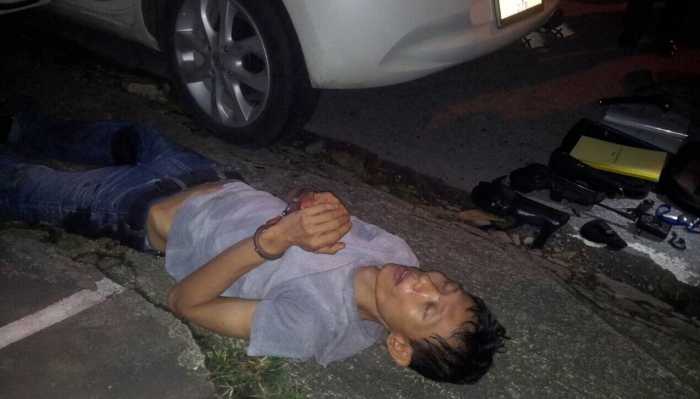 PHUKET: Police arrested a man suspected of several armed robberies at 7-Eleven stores after a shootout in Phuket today.

“Mr Piriya was taken to Vachira Phuket Hospital with a gunshot wound to the hip. The two officers involved in the incident suffered no serious injuries,” Phuket Provincial Police Commander Patchara Boonyasit told the Phuket Gazette.

Mr Piriya opened fire on police after he was caught in a sting operation.

“Based on the pattern of 7-Eleven robberies, we placed undercover officers at stores that we suspected the robber would hit next,” Maj Gen Patchara said.

“We got lucky, the sting operation worked on its first day.”

Police posing as 7-Eleven staffers confronted the robber after he entered a store in Srisoonthorn and threatened employees behind the counter with a gun.

“While he was ordering staff in the store to empty the cash register, I trained my gun on him and ordered him to surrender,” said Thalang Police Sub Lt Winit Chealam.

“But instead, he shot at me. Luckily, he missed and my colleague shot him.”

Despite his injury, Mr Piriya attempted to flee the scene, but the police apprehended him as he tried to get into a car parked 20 meters away.

Police found a number of items in Mr Piriya’s possession believed to have been used in previous robberies.

“We found a handgun, a helmet, a mask, a green jacket and a Civil Defense Volunteer shirt,” said Gen Patchara.

“The suspect is now under heavy guard at the hospital. We will question him once he has been treated, but I am confident we have our man.”

Mr Piriya is believed by police to be the same man caught on CCTV footage robbing two 7-Elevens last Sunday (story here) and could also have been involved in other 7-Eleven robberies last month (story here).