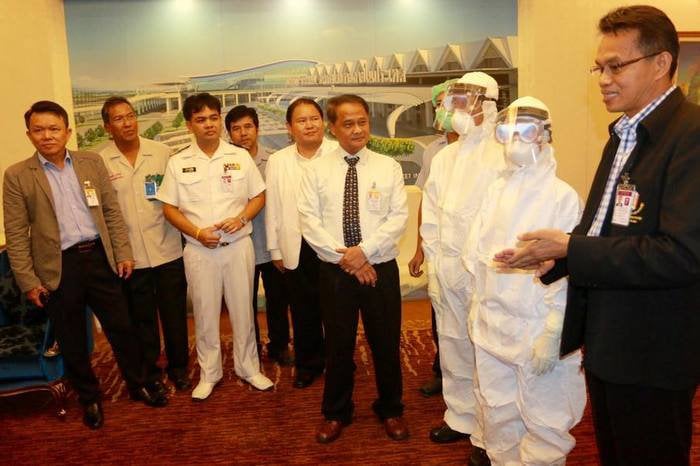 PHUKET: Island officials gave Phuket International Airport’s MERS prevention efforts a check-up on Friday to ensure the airport was able to identify passengers from South Korea and the Middle East who may be carrying the Middle East Respiratory Syndrome-Coronavirus (Mers-CoV).

The visit followed an order from the Ministry of Public Health in Bangkok last week to ramp up efforts to be on alert for the virus (story here).

Six airlines flying into Phuket currently have flights departing from South Korea and the Middle East.

“We want all staff at the airport and from these airlines to be on high alert for MERS and check all passengers to ensure that the virus does not spread here,” said Governor Nisit Jansomwong.

Infrared thermal scans are being used to check the temperature of risk-country passengers entering Phuket.

“Every traveller arriving from these destinations is being checked by the Disease Control Center at Phuket Airport,” confirmed Dr Kajohnsak.

“There is nothing to worry about. If we find a possible case of MERS, we have well-trained doctors in all of the island’s eight hospitals who are well prepared to handle such a situation.”

The PPHO first rolled out its MERS protocol in July 2013. It included isolation procedures and patient tracking, in case a person was positively identified with symptoms of MERS (Special Report here).

More than 100 cases of MERS have already been identified in South Korea. The outbreak killed nine people, reported The Nation. It began last month when a 68-year-old South Korean businessman brought the disease back from a trip to the Middle East (story here).