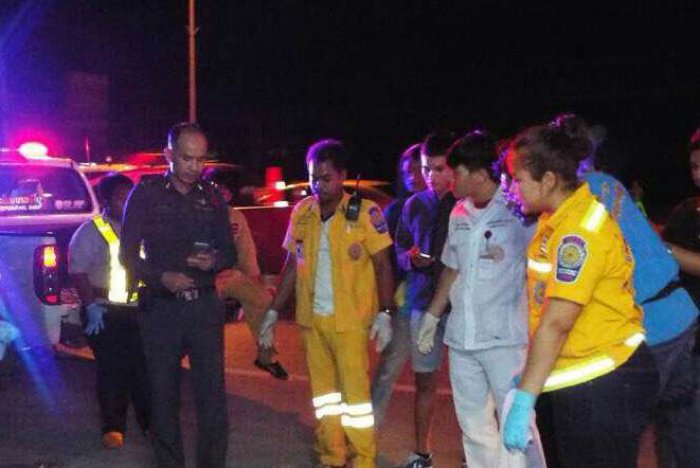 PHUKET: One Phuket resident was killed and three others injured early this morning, when three men on a motorbike ran a red light in Thalang and collided with another man on a motorcycle.

Police arrived at the Khao Lan junction on Thepkrasattri Road, just south of Tesco Thalang, at about 1:30am and found the body of Suriya Chaikul, 34.

“On the side of the road near a power pole we saw a damaged Kawasaki 800cc motorcycle and a black helmet, as well as a seriously damaged Honda Click motorbike in the middle of the road,” said Lt Suporn Muangkhai of the Thalang Police.

Police then questioned 24-year-old Wijit Konsong, one of the passengers that had been riding on the Honda Click when the accident happened.

“Mr Wijit told police that he was riding on the back of the motorbike with his two friends, 26-year-old Prachya Janthachum, the driver, and 24-year-old Ratanawit Jansena,” said Lt Suporn.

“He explained that they were heading west from Baan Khao Lan to Thepkrasattri Road and sped through a red light. Mr Suriya was heading north through the junction and collided with their motorbike at the intersection.”

Mr Wijit told police he saw the big bike coming toward them and was able to jump off before the collision, but his two friends were hit.

“None of the three men were wearing helmets. Mr Prachya was unconscious when officers arrived, and Mr Ratanawit was conscious, but suffered many serious injuries. Both men were rushed to Thalang Hospital,” explained Lt Suporn.

“Mr Suriya died on impact after he crashed into a power pole.”

Police have not pressed charges over the collision, as they have yet to confirm Mr Wijit’s account of the accident.

“We have not yet been able to determine exactly who was driving the bike. After Mr Prachya recovers and we have more information, we will press charges,” said Lt Suporn.