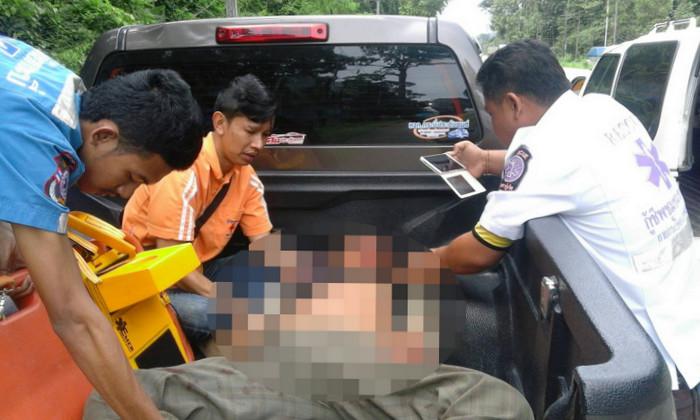 PHUKET: Police are hunting for a gas station manager who allegedly shot dead a Krabi volunteer police officer yesterday after an argument over who left on the water to an artificial waterfall.

Lt Anuwat Raksakyot of the Ao Nang Police said he received a report yesterday morning that a man was shot at the gas station on Petch Kasem Road in Khao Kram sub-district.

“The station has a decorative garden and artificial waterfall,” Lt Anuwat said. “When we arrived, there was blood on the ground and the victim, Pha Umat, 57, had already been taken to Krabi Hospital.”

“Mr Pha is a volunteer police officer and was hired to set up the garden and waterfall at the station,” Lt Anuwat said. “He was shot three times, once in the head, once in the left shoulder, and once in the chest, with 9mm bullets.”

Mr Pha was pronounced dead at the hospital.

“According to witnesses, Mr Pha arrived at the station to check on the ornamental waterfall, when the station manager, Chaiwinit Kaewsamduang, 54, came in and blamed Mr Pha for leaving the water on inside the station,” Lt Anuwat said.

“The two argued and Mr Chaiwinit pulled out a gun, intending to shoot Mr Pha,” Lt Anuwat said. “The two struggled over the gun until finally Mr Pha lost and was shot.”

After the shooting, Mr Chaiwinit reportedly fled the scene in a white pickup truck to Ao Luek district.

Bypass construction gridlock to be solved