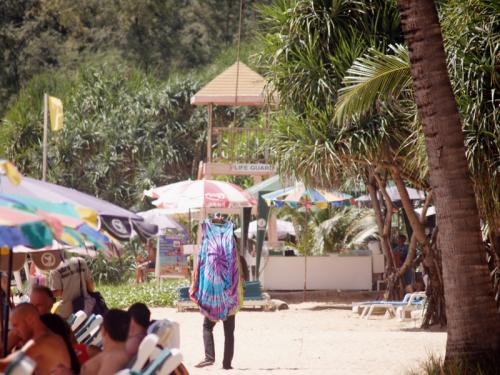 The move comes as the contract with the Phuket Lifeguard Club expires at the end of this month, coinciding with the regular arrival of the annual rainy season, when the island’s beaches claim tourists’ lives each year.

“With everyone’s safety as our priority, we are planning to increase the number of lifeguard stations from 33 last year to 38 stations this year,” said Kanyarat Senrung, an officer at the PPAO’s Tourism Department.

“Although the terms of the contract to be offered to the Phuket Lifeguard Club have yet to be finalized, at this stage it looks like the budget offered will be the same as last year,” she added.

Phuket Lifeguard Club President Prathaiyut “Nut” Chuayuan told the Phuket Gazette today that he had yet to hear of any new offer from the PPAO for his members to continue providing their essential life-saving service.

He also said the five new lifeguard stations was news to him, but he welcomed the move.

“It’s a good thing. It would make the beaches safer for tourists,” he said.

“I would have to talk to our members first and see the conditions offered, but I personally would like to come to some arrangement to make this happen,” he said.

Last year, the Phuket Lifeguard Club initially declined to renew their contract with the PPAO, as they claimed the thankless job paid little and offered very little in providing the equipment needed or any professional development to keep lifeguards on the beaches (story here).

However, the club finally agreed to provide the lifeguard service. “I agreed to sign the new contract with the OrBorJor [PPAO] because nobody else wants to do it. This is hard work with no profit,” Mr Prathaiyut said.

Highlighting the danger of Phuket’s surf during the southwest monsoon, two tourists drowned while the lifeguards were not at their posts (story here).

However, despite the good work of the lifeguards, 14 people drowned during the period.

Regardless, Ms Kanyarat defended the lifeguards.

“They do their job. Those who drowned did so because of a pre-existing medical condition. Some of them were also drunk,” she said.

Ms Kanyarat urged everyone to observe the surf warning flags.

‘Red flags mean ‘No Swimming’. They are posted to inform people of dangerous currents, submerged rocks and other threats that lurk offshore,” she said.

“A yellow flag indicates the area is not supervised by lifeguards, but one may swim with caution, while flags that are yellow and red tell swimmers that lifeguards are on duty and keeping watch on the area between the yellow-red flags,” Ms Kanyarat explained.

“People should only swim when the yellow-red flags are displayed, and they swim only between those flags,” she said.