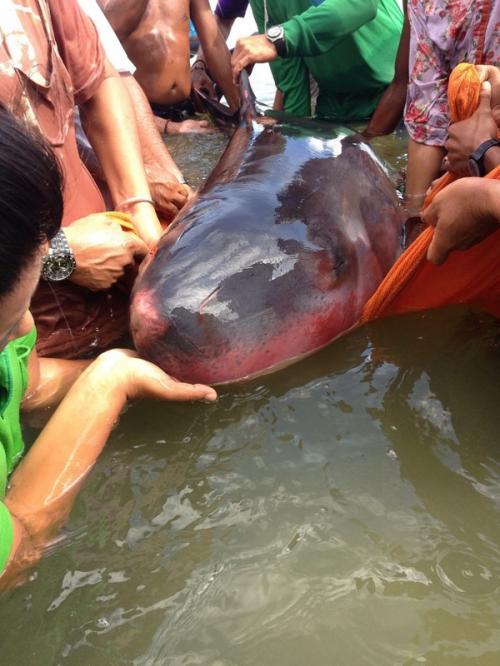 PHUKET: A dwarf sperm whale measuring 2.4 meters long was treated with a dose of antibiotics and released back into the sea after being spotted off Patong Beach on Wednesday.

Phuket Marine Biological Center (PMBC) officers received a report of the ill whale at about 8:30am.

The animal, weighing only an estimated 150 kilograms, was found in front of the police box at the end of Patong’s famed Soi Bangla.

“The whale had cuts on its head and dorsal fin. We gave it an injection of antibiotics and vitamins to protect it from infection and to help it to regain its strength. After that we released it back to the sea,” Dr Kongkiat Kittiwattanawong, who heads the PMBC’s Endangered Species Unit, told the Phuket Gazette.

“We could not identify the gender of the whale. We saw it swimming weakly on the surface of the water, which is often a sign that a whale is suffering from some illness. Whales, even dwarf whales, usually swim underwater,” he added.

“The whale might have been heading for the beach because it was too weak to swim and was injured by waves pushing it onto rocks,” Dr Kongkiat explained.

PMBC officers will continue to monitor the dwarf whale offshore to make sure it does not beach itself again, he added.

“If it does, we will have to take it to the PMBC [at Cape Panwa] for further treatment,” Dr Kongkiat said.

“They mainly eat squid. An adult dwarf sperm whale can grow up to about 2.7m long and weigh up to 250kg,” he said.

“We have found only seven dwarf sperm whales in Thailand in the past 25 years: four in Phuket, one in Phang Nga and two in Satun,” Dr Kongkiat added.