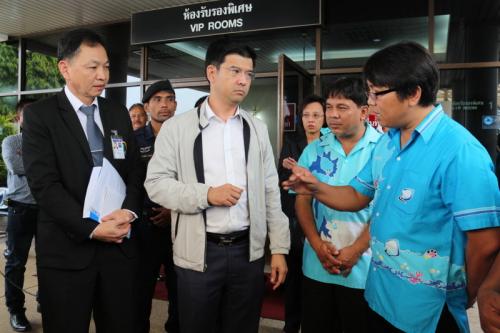 PHUKET: About 50 taxi drivers who previously operated illegal “black plate” taxis arrived at Phuket International Airport on Monday to request permission to open a counter inside the terminal.

The drivers, all members of the newly-formed Mook Andaman Business & Travel Co-operative Ltd, asked to open a counter inside the main terminal while Airports of Thailand (AOT) chiefs decide on the terms of the concession the new co-operative will be offered.

“We have about 250 members who all want to work legally under the conditions laid out by AOT,” Mook Andaman Secretary Ittipol Mekmanee told the Phuket Gazette.

“The companies that have concessions to operate taxis at the airport are trying to block us from providing our service. The police and airport security will not allow us to pick up passengers at the airport,” Mr Ittipol added.

Phuket Airport Director Prathuang Sornkham explained that Mook Andaman has applied for a concession to operate taxis at the airport.

“The application is still being considered by the AOT board in Bangkok,” he said.

“The concession contracts for both companies will end on June 30. The AOT board is reviewing the terms of the concessions, including the concession to be offered to Mook Andaman, and will be finished as soon as possible,” Mr Prathuang explained.

“The concession fee is about one million baht per month,” he added.

The request of the 50 drivers came as AOT Chairman Sita Divari arrived in Phuket for the Airports Council International Asia-Pacific regional assembly, which began on Monday and is scheduled to conclude tomorrow.

In response to the drivers’ request, Mr Sita said, “I want to see fair treatment for all companies that serve AOT, but I also need to ensure fair service is provided to customers, that the volume of cars provided is suitable for the number of passengers, and that a reasonable income is provided to AOT.”