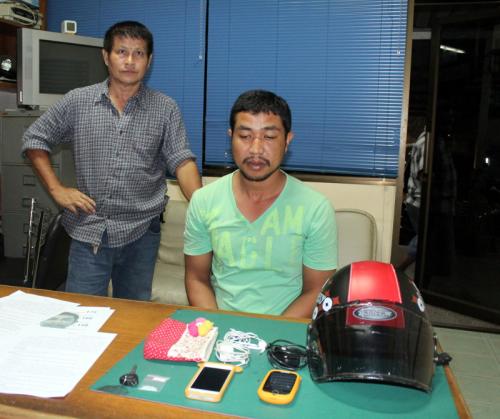 PHUKET: A Songkhla man fresh out of jail for bag-snatching was apparently out of practice and failed in his first attempt to grab a woman’s purse yesterday afternoon.

He succeeded on his second try, but landed in the hands of the police shortly thereafter, thanks to the “Find My iPhone” application.

Just two days out of prison in Songkhla, Suphada Tuansuwan, 29, had come to Phuket to meet his girlfriend.

“He tried to snatch the bag of Yuwanda Saenprom at the entrance of Koey Thong Housing Estate in Kathu Soi 1, about 200 meters from the Kathu Waterfall,” said Lt Col Boriboon.

“Ms Yuwanda refused to let go of her bag, so Mr Suphada pushed her down on the street. He struck her head against the cement, but finally ran off without getting any of her property,” the policeman said.

“About 30 minutes after the first attempt, he snatched the bag of Sasiwimon Petchleum while she was on her motorbike in front of the Seekor Market, on Wichit Songkram Road in Kathu,” he explained.

“He drove his bike on the left side of Ms Sasiwimon and grabbed her bag, which was hanging from her bike’s left handlebar. Then he drove off,” he said.

“Ms Sasiwimon used the ‘Find My iPhone’ application to track down the iPhone in her stolen bag and found that Mr Suphada was in Patong,” Col Boriboon explained.

“We tracked him down and arrested him at his rented room in Patong,” he added.

“We found an iPhone 5, a Samsung mobile, a lady’s bag and 0.71 grams of ya ice [crystal methamphetamine] in his room,” he said.

“Mr Suphada told us that he was imprisoned for bag snatching in 2011. He was charged with attempted robbery, bag snatching and possession of a class 1 drug,” Lt Col Boriboon added.