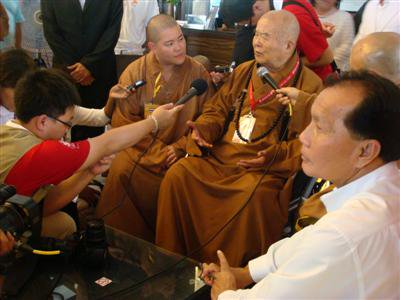 PHUKET CITY: Among the scores of ethnic Chinese flocking to the island to take part in the Vegetarian Festival were some 1,700 Chinese Buddhist monks and followers from the Taiwan-based Fo Guang Shan monastic order.

They were aboard the massive vessel for a meeting of Fo Guang Shan followers from around the world.

Led by Venerable Master Hsing Yun, their stay in Phuket to catch a glimpse of the Vegetarian Festival was brief.

The group disembarked at Phuket Deep Sea Port just before noon, staying only a few hours before leaving for Singapore at about 4pm.

They were welcomed by local officials including Phuket Vice-Governor Worapoj Ratthasima.

V/Gov Worapoj thanked Hsing Yun for stopping in Phuket to catch a glimpse of the annual festival.

He also asked the cleric to continue spreading the sect’s brand of humanistic Buddhism around the world and to encourage believers to make merit by donating money to fund construction of a large Guan Yin image here in Phuket.

The image will be built on a small island made of reclaimed land in the shallow waters off the tip of Saphan Hin, near the Chinese Shrine there.

Guan Yin is a bodhisattva, usually represented as a female, who is venerated by East Asian Mahayana Buddhists.

Most Buddhists in Phuket are of the Theravada sect, but there is also a large number of ethnic Chinese Buddhists on the island who revere Guan Yin as a source of compassion.