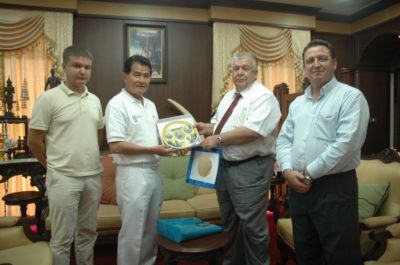 PHUKET CITY: A delegation from the Russian city of Nakhodka met the Phuket governor at Provincial Hall this afternoon as part of a bid to tighten the relationship between the two cities.

First Vice-Mayor of Nakhodka Boris Gladkikh presented Governor Wichai Phraisa-ngop with a commemorative plate as a gift from his city to Phuket.

Mr Gladkikh and his staff arrived in Phuket on Monday and will stay until Sunday.

It is the second time the Russian leader has visited the island.

“I have felt so much warmth from the Thai people here,” he said. “I think Thailand, and especially Phuket, is a great place for a vacation or to make a living because of the excellent service, good food, nice weather and low cost.”