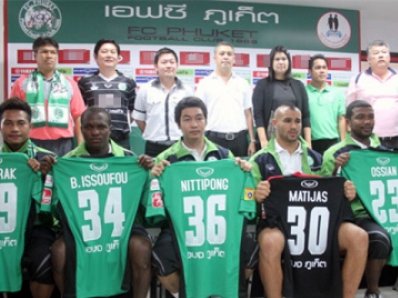 PHUKET: FC Phuket’s match on Sunday against Rajapracha FC in Nakhon Pathom ended in a scoreless draw, irritating Phuket’s winless wound in its eighth away game this season.

There were about 1000 spectators that showed up to cheer the Rajpracha “Crowns” at Mahidol University Salaya campus stadium.

Rajapracha FC also showed off a new signing in 21 year-old Santitorn Lattirom, a midfield transfer from Chonburi FC. His addition to the squad increases the already potent Crown attack with Chusak Suwanna and Krissana Wongbuddee.

However, Santitorn’s debut provided no goals for his new club, but the referee did take his name for an 89th minute yellow card. The second yellow card of the game was given to Phuket’s Nithirot Sokuma in the 92nd minute.

Both sides had scoring chances, but the scoreboard remained at 0-0 for the entire game.

The final whistle blew, and deservedly left the teams with a point each.

Rajapracha picked up their fourth draw in 18 matches which includes eight wins and six losses. With 28 points, they remain in 7th place.

Still in 9th place, Phuket earned their seventh draw and their fifth in eight away games. Including their six wins, Phuket have 25 points, just one point behind Saraburi FC.

Other TPL Division One results this weekend:

Phuket are scheduled to play Big Bang Chulalongkorn United (BBCU) this Sunday. This will be the third time Phuket and BBCU have met this season.

On March 13, Phuket hosted BBCU at Surakul Stadium in a league match which ended in a scoreless draw.

On June 29, Phuket hosted BBCU again in a Toyota League Cup game in which the Southern Sea Kirin knocked out the Pink Panthers 2 – 1 in extra time.

BBCU will look to avenge their cup defeat and a lively crowd is expected to turnout at their Army Stadium in Din Daeng, Bangkok which has a capacity of 20,000. Kickoff will be at 6pm.