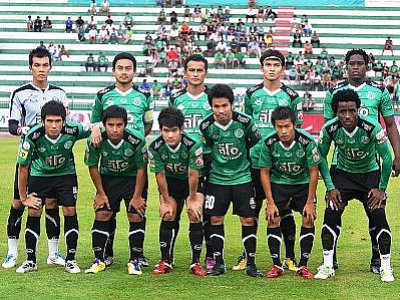 The game’s only goal came in the 30th minute by the visitor’s Cameroonian import, Ronald Kufoin Djam, who initially flicked the ball to the back post from a corner kick by Santi Chaiyaphauk. The ball was returned to the center of the goal mouth for Djam to head the ball home just under the cross bar.

While both sides saw a handful of opportunities and shots on goal throughout the rest of the match, Surakul’s aged scoreboard – which doesn’t even feature a clock – didn’t budge for the rest of the evening.

The referees were active, however, issuing four yellow cards to the home team with Poramut Krongborisut, Wiratrot Chanteng, Nithirot Sokuma noted in the referee’s book and Kone Adama who was booked for “simulation” after being taken down while driving inside Suphan’s penalty box.

Adama’s booking incensed a number of Phuket fans who questioned the official’s interpretation of the incident.

In the final moments of the match, some fans showed their distaste by launching dozens of plastic bottles onto the pitch.

One African Suphanburi player, Gnepa Didi raised his hand in gratitude after taking a swig from a half full bottle of water that was energetically pitched from the Hulks’ main stands.

This gesture instantly neutralized the Hulks whose obscene shouts instantly turned into laughter and applause.

Even the entire Suphanburi team was awarded a final drum and cheer tribute by Phuket fans as their anger had clearly shifted to the officiating.

When the final whistle blew, dozens of unsportsmanlike Phuket fans, refusing to accept defeat, crowded at the field’s sole entrance to clearly intimidate the officials.

This prompted the need for a Police escort to finally accompany the officials off the field.

Clear of relegation threat, and unable to get promotion, Phuket remain in 7th place of the 18 team league.

With the addition of three points, Suphanburi moved from 13th place up to 10th place, now with 38 points and thus nearly clear of any relegation threat.

If Suphanburi can win one of their two remaining matches (two home games against Chainat and Rajpracha), they will likely secure their status in Division One next season, on the condition their goal difference does not depreciate by much. Otherwise, their fate will be decided by how Customs United, Chanthaburi, JW Rangsit and Air Force United finish the season.

Now with 38 points, Air Force need at least a win and a draw from their four remaining matches to ensure they will not be relegated.

Air Force United are FC Phuket’s next opponents. The two sides will clash on Christmas day (Sunday) at Surakul Stadium. Kick off is set for 6pm.

The Phuket Gazette will inform readers should there be a change to this schedule.

Tsunami no longer a factor in Khao Lak tourism: Survey