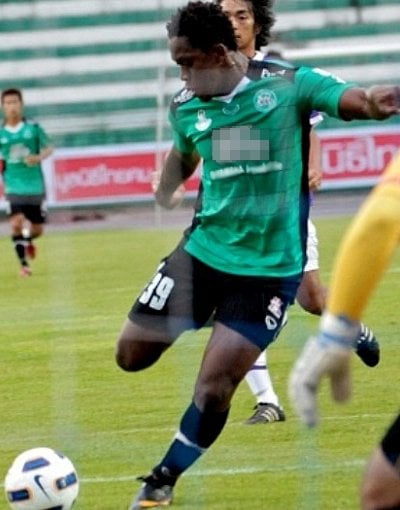 PHUKET: Three wins in seven days has given new FC Phuket coach Sompong Wattana some breathing room after setting his stall out to not lose three on the trot when he joined the club just three weeks ago.

A 1-0 win over Thanyaburi Rose Asia United FC in Saturday’s Toyota League Cup first round gave Phuket their first away victory this season and their first clean sheet since beating Chiang Mai FC 4-0 on April 17 at Surakul Stadium.

Thanyaburi FC lie 10th in the AIS Bangkok Regional Metro League, while FC Phuket are currently ninth, one step up in Division 1 of the Thai Premier League.

Having beaten Bangkok Christian College FC 7-3 on Wednesday and annihilated Chainat FC, 4-1 last Saturday, anticipation of another goal-fest was high.

Kone Adama looked to extend his purple patch as early as two minutes into the game, but was foiled by a solid Thanyaburi defense.

Continued forays into the home sides danger area eventually wielded reward. Sarach Yooyen boosted his name for the club’s golden boot award with a ninth minute goal which flew like a guided missile over the head of Thanyaburi keeper Aekbadin Nobnom.

Phuket almost went two up in the 18th minute when Sutee Sakdiwong crossed from the right, but Kone Adama was unable to find the mark with his header.

In the 25th minute, a mazy run by Phuket’s Paulo Renato left three Thanyaburi players in his wake, but the Brazilian’s subsequent shot came to nothing.

Four minutes into the second half, Thanyaburi’s Kim Bonha came close to equalizing when his 20 yard strike came off an upright.

A period of ten minutes saw Thanyaburi take the game to Phuket. Wacharin Phosa-aad brought out a good save from Leuchar Juntawong in the Phuket goal. Moments later he pulled another shot just wide.

Realizing the danger, Phuket decided to go on the offensive rather than sit on the lead.

Renato drilled a shot that was blocked by Aekbadin late in proceedings and did not find the foot of any of the Phuket players.

Thanyaburi almost earned extra-time in the last minute, when Wacharin and Bohna both hit the target, but a splendid double save from Leuchar secured Phuket’s appearance in round two of the Toyota League Cup.

Match reports on both the Bangkok Christian College and Thanyaburi games will be available in this week’s hard copy of the Gazette.

Sukchai Sriracha, coach of Thanyaburi said: “Our boys followed the tactics that we had laid out for this match, but we have to show admiration for the game played by our opponents today, they defended very well. The score is not a true representation of the game we saw today.”

Somphong Wattana, Coach of Phuket: “The physical condition of our players in today’s heat prevented us from playing to our full potential. We were lucky to score the winning goal.”

Phuket will return to league play on Saturday, June 25 when they lock horns with 4th -placed Songkhla FC. This encounter with the “Fighting Bulls” as they are fondly known by their fans will present the “Hulk” a challenge to turn out in numbers given that Songkhla have the highest average attendance rate in the division.

Kick-off is scheduled for 6pm.