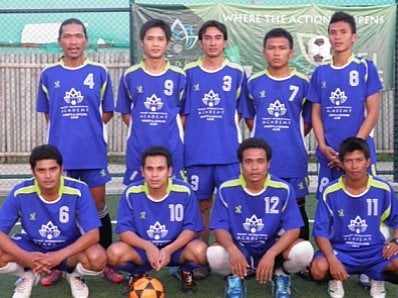 Top of the table Portrait FC faced an improving Island Boys side with an in-form goalkeeper as the evening’s opening bout.

The first half ended goalless as a result of some inspirational shot-stopping and the second half began with Portrait’s attack knowing they would have to produce something special to earn victory.

Slick passing eventually made the difference and on 31 minutes Portrait’s Kitti was able to score from close range.

This forced Island Boys to push for an equalizer, and with a minute remaining Portrait countered with a cross from the right that deflected off an Island Boys defender for an own-goal.

SGS were next up against Jitjongrut FC. Both teams were eager for victory and a vital three points. SGS were first on the scoresheet with a goal from top scorer Duangdee on nine minutes and the only score in the first half.

The second half was a different story with three goals within three minutes of the restart.

In the 29th minute Jitjongrut’s Aruk found the back of the net, but Duangdee of SGS replied two minutes later with his second.

In the 32nd minute, Aruk scored his and Jitjongrut’s second goal of the game. A frantic final few minutes followed and in the 38th minute Aruk completed his hat trick to give Jitjongrut a crucial three points in their quest for second place in the league.

The final match of the evening saw Thalang Tigers up against local rivals Thanyapura SLC. A closely contested first period ended 2-0 in the Tigers’ favor when their captain Neung scored a brace in just two minutes.

Thanyapura took the game to Thalang in the second half and were rewarded with a goal in the 30th minute from defender Artit.