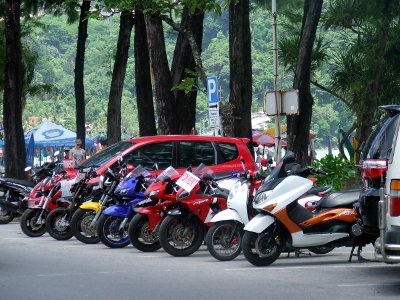 PHUKET: Phuket Police are investigating the apparent suicide of a Russian tourist while in a detention cell at Patong Police Station on Saturday night.

Mr Evgeny apparently took his life at about 10pm by using his shirt to hang himself by the neck from an iron bar inside a cell where he was being held in solitary confinement.

“We do not yet know what caused him to commit suicide. We intended to question him the following day, after he calmed down,” Lt Pattapee said.

Mr Otrubyannikov’s detainment followed a report earlier the same day by a motorbike rental operator on the beach road, opposite Burger King.

Under the condition of anonymity, the operator said that the man appeared at about 5:30pm with two gasoline-filled bottles – and a cigarette lighter.

“He just walked up and poured the gasoline onto my rental motorbikes and onto himself, while holding a lighter. I pushed him away from my motorbikes, and some tuk-tuk drivers helped me grab him and seize the lighter,” said the operator.

“He seemed quite drunk and smelled of alcohol. Meanwhile, he said something about his passport that I didn’t understand very well,” he added.

The operator denied having rented a vehicle to the Russian, who was in possession of the passport when taken into custody by Patong Police.

“He may have had a problem with another rental outfit and got confused,” said the operator.

Arguments between motorbike rental operators and their clients are a common source of problems in the Phuket tourism industry.

Although required by law to be able to be able to produce their passport at any time when requested to do so by authorities, many tourists willingly hand over their travel document as a form of surety when renting out a bike.

Problems inevitably result when there is a motorbike accident, injury, arrest or the passport is accidentally lost.

Although the issue has been raised repeatedly in recent years at meetings among the island’s honorary consuls and sitting governor, little has changed in how the motorbike rental industry operates.

Renting a motorbike is a dangerous but financially attractive option for tourists in Phuket.

A good-quality motorbike can be rented out for a whole day for about 150 baht, about half the cost of a short ride in a tuk-tuk.