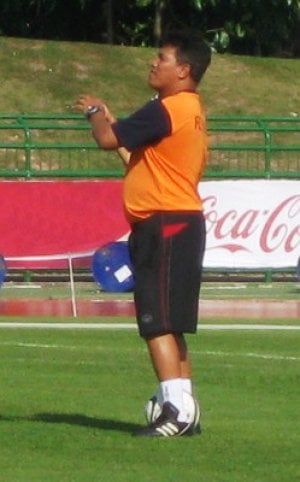 PHUKET: FC Phuket clash with TOT SC in the third round of the FA Cup today in Nonthaburi.

TOT SC manager, Somchai Subpherm, who is considered to be “Thailand’s Maradona” may well be making the same mistake as Sri Racha in underestimating the giant-killing Phuket team.

“For this upcoming match with FC Phuket, we plan to keep some of our starting players on the bench so they can rest for their future league matches. However, the team we will field will still be a complete and capable one. You will still see familiar players out there.”

“We shouldn’t have too much trouble advancing to the next round, I think we are superior to the visiting team,” he added.

Phuket coach Sompong Wattana was realistic ahead of facing another TPL team at their home ground, but was still optimistic that his squad would give it their all.

“We have a very strong team ahead of this match, our captain Suphat Aonthong is still out due to injury. As for Tamishi Hayiyuza, his ankle was not at its best during last practice, but this should not be an issue. We will check his fitness again before deciding whether to let him play. Other than that, our players are good.

“Despite our disadvantage, I don’t think we feel any pressure. That said, we will still give 100 per cent and fight for a win,” Sompong said.

Kickoff is at 4pm.

Result and match report will be on the Phuket Gazette Sports page tomorrow.