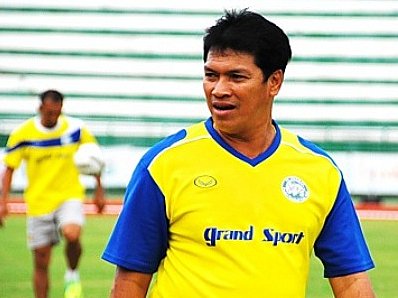 PHUKET: FC Phuket players and coaching staff are appealing for a flood of fan support for tonight’s league match against Suphanburi FC, also known as the “Elephant-back Warriors”.

Assistant Coach Apichart “Mo” Mosika asked the Phuket Gazette to encourage FC Phuket fans to be at Surakul Stadium tonight for the team’s 31st game of the 2011 Division One schedule.

“It is near the season’s end now and we need as many fans as possible to support us. The game has been scheduled for 7pm to allow people who work enough time to come,” he said.

Leading team scorer and SEA Games national squad midfielder, Sarach Yooyen echoed the coach’s appeal and told the Gazette that he hopes for a large turnout, saying he was confident of a win.

“We have to be careful against Suphanburi because they’re aiming not to be relegated, but overall, I think we can do well,” he said, adding that he is still a bit tired from traveling, having just got over a cold.

Confidence wasn’t universal on the squad.

Phuket’s star French goalkeeper, Johnathan Matijas said “I have the feeling the team is already on vacation, as we have no goals to play for – since we can’t get promoted nor do we face relegation. Some players don’t have motivation so it’s difficult to be confident for any match. But I am ready and I want to play and win! I will try to motivate all starting players for the match.”

Assistant Coach Mo told the Phuket Gazette that he is also a bit worried that the players’ performance levels will drop.

Asked about the team’s readiness, Coach Mo said, “We have had a rest of only two days since our last game on Saturday. I am worried that the players are exhausted from this tight schedule, and so we will have to drop some main players and replace them with reserves. At the start of the game, we will play a paced game, and see if we can beat them early. Then we will play offensive and try to get three points.”

For starting positions, Mo said he will consider either Tameezee “Z” Hayeeyusoh or Kone Adama to play with Watcharapong “Pae” Jun-ngam in the forward line-up.

“Tameezee has a small problem with a strained leg muscle. If he is unable to play, then Kone will start. In the middle, Sarach “Tang” Yooyen and Hossian “Sian” Nussim will be in the center, Kornphrom “Poon” Charoonphong on the left, and either Poramat “Mud” Krongborisut or Jongrak “Bank” Pakdee on the right.”

In the defense, Nenebi and Wiratrot “Too” Chanteng in the center, and Ronnachai “Art” Jinnakate on the right. Nitipong “Bas” Limsuwan, who usually plays left back, is serving a one-match suspension after receiving multiple bookings. As such, we have yet to see who will fill the position, but it will likely be either Niran “Noom” Panthong or Nithirot “Mon” Sokuma,” said coach Mo.

FC Phuket are now in 7th place in the league with 44 points from 11 wins, 11 draws and eight losses.

Their opponents tonight, Suphanburi are in 11th place with 35 points from 31 matches which includes seven wins, 14 draws and 10 losses.

In their last encounter in February, Phuket drew 1-1 away at Suphanburi.

Suphanburi are among seven teams fighting the threat of relegation. Of the four relegation spots, two have already been claimed by Thai Honda and RBAC. The other two are being contested by Chiangmai FC (29 points), SP Customs United (32 points), Air Force United, CT Chanthaburi, Bangkok FC, Suphanburi (all with 35 points) and JW Rangsit (36 points). Each of these teams have two to three matches to secure their Division One status for 2012, with the exception of Air Force (five matches remaining) and Bangkok (four matches remaining)

After tonight’s match, Phuket have three matches remaining in the season – two home and one away as follows:

Phuket will finish the season on the road against already promoted, Chainat FC on Saturday, January 14.