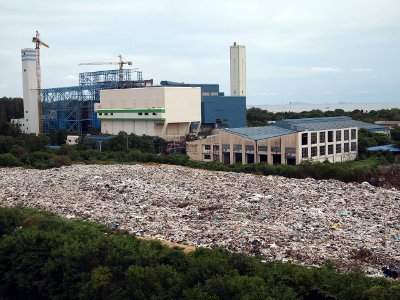 PHUKET: The second trash incinerator currently under construction at the Saphan Hin facility is expected to be operational by March.

Chief Prachum Suriya, Phuket City Municipality, Environmental Division, detailed the progress made so far in the construction of the incinerator, which started in 2009 and is now about 80 per cent complete.

The new incinerator is expected to have the capacity to dispose of 600 tons of waste a day. It is a stoker-firing incinerator, which will burn at over 950ºC and has a clean-burn system, meaning its emissions can be controlled in order to comply with pollution regulations, said Chief Prachum.

The project is set to cost 940 million baht and will produce over five megawatts of electricity per hour once it is running, added Chief Prachum.

“When the second incinerator is complete, we will close the first incinerator for upgrades maintenance over the following 16 months.

“After finishing the work to the first incinerator, we will have two incinerators working together and they will be able to handle 900 tons [of rubbish] a day. This is more than enough [capacity] for right now, as we have only 600 tons of trash to dispose of [a day].

“It [the combination of the two incinerators] will be able to handle the amount of waste in Phuket for the next 10 years,” said Chief Prachum.

All residential trash from waste disposal kept at the 120-rai landfill at the Saphan Hin site will be burned with the second incinerator, because now the landfill is almost full of trash, Chief Prachum said.