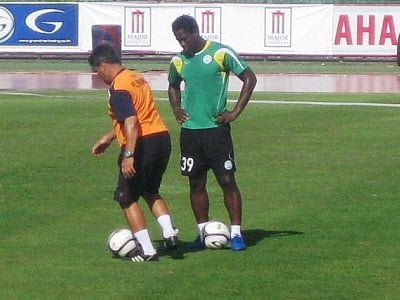 PHUKET: FC Phuket play Sri Racha (Blue Marlins) in the second leg of the Toyota League Cup with the winner securing a place in the quarter-finals, at Suzuki Stadium in Chonburi tonight.

A 1-1 draw with the Sponsor Thai Premier League side last Wednesday means that Phuket have to win away from home this evening.

A missed penalty at Surakul last Wednesday must be wiped from the minds of the Phuket players if they are to have any chance of advancing to the last eight.

Phuket’s Sarach Yooyen will miss the encounter as he continues to recover from a severe ankle sprain. Coach Sompong Wattana said that the injury is almost healed, but he did not want to risk Sarach’s league season for a cup game.

Suphat Onthong’s injury during the Big Bang Chulalongkorn University game was initially reported as a broken leg but is now described as “severe bruising surrounding previously broken toes.” However, he will remain on the bench for the next three weeks.

Sri Racha will see the return of their striker Aaron Da Silva, who will certainly cause headaches for the Phuket back line.

Dusit Chalermsaan, coach of Sri Racha said, “We expect to celebrate a home win this evening. Playing for a 0-0 draw is always difficult and puts too much pressure on the team. Our objective is to score and maintain that advantage.”

Phuket’s Coach Sompong was little more philosophical when he said, “We need to find and exploit weaknesses in our opponent. The team will handle tonight’s result, whatever the outcome.”

Tonight’s cup match to determine the quarter-finalists will be shown live from 6:30pm on Siam TV Truevision 74. Kickoff is at 7pm.