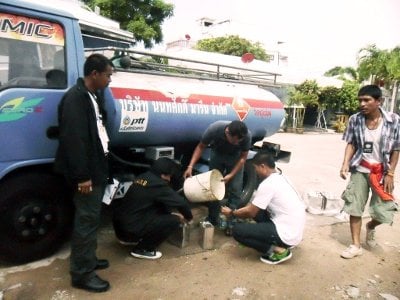 PHUKET: Police made one arrest and seized 10,700 liters of smuggled gasoline in Phuket after following a tip-off yesterday.

Col Surisak Wichaidist, Superintendent of the Regional Police Investigations Division, led a group of officers to investigate a speedboat repair facility in Rawai at 11am.

They had received a tip-off that Nontasak Marine Co Ltd was hoarding and smuggling gasoline in an underground storage tank for use in their day-to-day operations.

After inspecting the entire area, gasoline was found stored in a truck-loaded tank and two tanks above and below ground level. The fuel was confiscated as evidence for further examination.

The officers questioned the facility’s manager, Supakitti Keawpradit, before taking him into custody on charges of evading taxes on the gasoline in his possession.

The charges carry a fine of two to 10 times the amount of tax due.

FC Phuket away to Sri Racha in Toyota Cup

UK Home Secretary to decide on Aldhouse extradition to Thailand