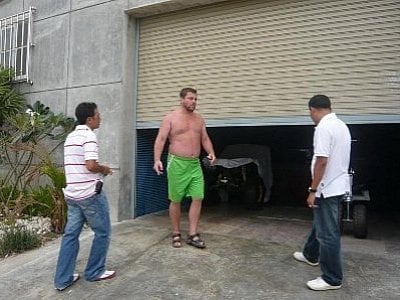 PHUKET: Arrested German national Lars Scheffczik denies being involved in an alleged internet scam that defrauded people of about one million euros.

Speaking exclusively to the Phuket Gazette from a holding cell at Chalong Police Station, Scheffczik said, “I have never used these people like that.”

Scheffczik, 38, was arrested by Phuket Immigration at his home in Rawai on Monday.

“He has been charged with illegally entering Thailand and was wanted on an international arrest warrant for defrauding people in his home country,” said Immigration Inspector Maj Kaken Nijornatsachai.

Scheffczik will be prosecuted by Chalong Police for illegal immigration first, then deported to Germany to face prosecution by German authorities, Maj Kaken explained.

Deportation was likely to take “only a few days,” he added.

“The German government canceled his passport in April 2007, so he has not used his passport for a long time, or he could not find it. He was probably hiding in Phuket for five to six years, but has been living in Thailand for eight years,” Maj Kaken said.

Regarding the fraud allegations, the inspector said, “It seems the German embassy wanted documents and rubber stamps that Scheffczik used to trick people into signing contracts, or to show that he had some form of authority, but we haven’t found any documents like that from him.”

Mr Scheffczik maintains his innocence, however.

“In Germany some people had their bank accounts robbed and they think it was me. They just blame people, but I have never used these people like that,” he said.

“All I know is that I want to go back to Germany quickly, but the problem is I don’t know how long they will keep me locked up here,” added Scheffczik.

During his time in Thailand, Scheffczik has fathered two children, one just eight months old, with his Thai partner, .

“Immigration are nice people. They have a good officer there who has been helping me, but they don’t understand the problem that I have,” he said.

“Deportation is not a problem. I just don’t know how long I will have to stay here, or how slow the process will be,” he added.