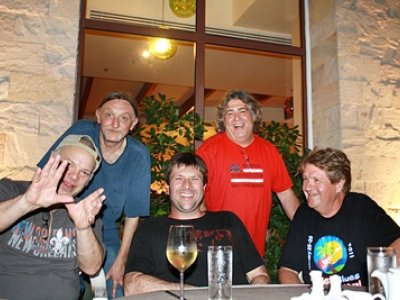 PHUKET: The Sixth Annual Phuket International Blues Rock Festival is set to rock the island from the moment it starts tomorrow evening.

The ten bands come from seven different counties and are among the best in the world of Blues, many honored with multiple awards and nominations.

Headliner Curtis Salgado, the man who inspired and mentored John Belushi for his role in The Blues Brothers mega movie, probably leads the award winners with his ‘Male Artist of the Year’, garnered last year at the Blues Foundation Awards in Memphis, Tennessee.

For a full list of the bands and the schedule of their performances over the next two nights, click here.

Note that the action starts tomorrow evening at 6pm, at the Hilton Phuket Arcadia Resort & Spa on Karon Beach.

Festival Director Andy Andersen told the Phuket Gazette this afternoon that, “Tomorrow night we’re going to let loose the brakes. You will see. I’m expecting absolutely the best festival and the largest crowds in the event’s history.”

Once again this year, the festival is proudly sponsored by the Phuket Gazette and The Nation multimedia news organizations.