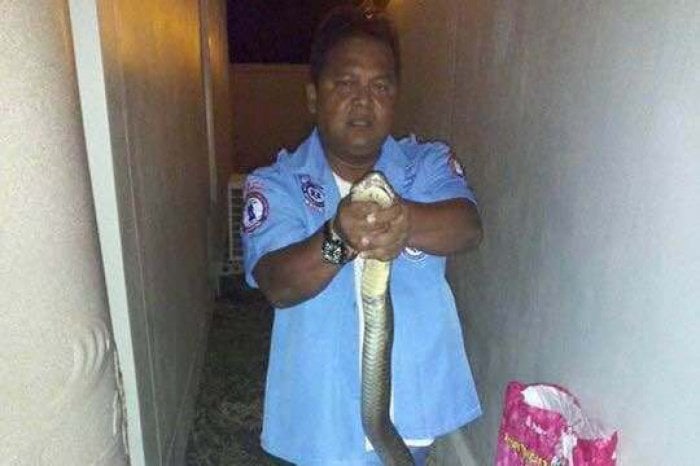 PHUKET: A four-meter-long king cobra was wrangled into submission by rescue workers as it tried to sneak into a Phuket hotel room last night.

Saiyan Thamaphan, chief of the Phuket Ruamjai Rescue Foundation, and his team arrived at Star of Phuket Resort to find panicked tourists and locals gathered outside.

“We found the king cobra trying to gain access to one of the rooms. The people were all very frightened,” said Mr Saiyan.

“I did not expect the cobra to be this big. We normally only catch small ones – I was quite frightened myself when I saw it.”

It took rescue works only a few minutes to safely remove the 40-kilogram reptile.

“I am glad that the locals did not try to catch the snake on their own,” Mr Saiyan said. “If you ever find a snake, please call us immediately. Do not try to handle it by yourself. It can be very dangerous.”

The cobra was later released into the jungle at Mai Thao Sib Song Hill in Chalong.

The news of the cobra follows the capture of a massive python in Phuket Town on Monday (story here).

Cheap tuk-tuk service to be launched in Phuket Town