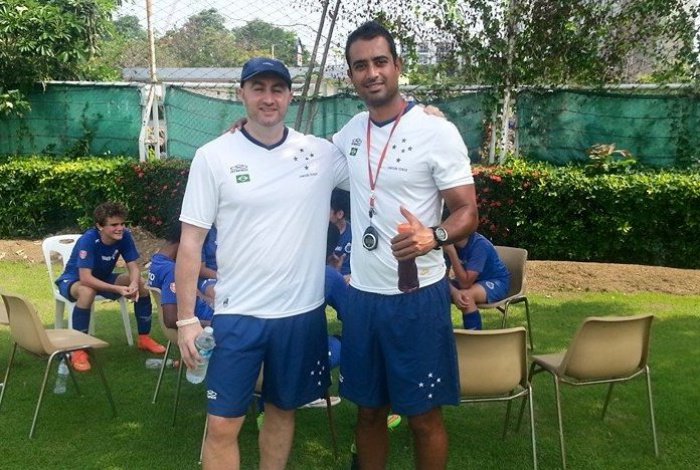 “The Bangkok International Youth Football Festival 2015 provided a great opportunity for our academy teams to play against some of the best football academies in Asia,” Mr Candido said. “It was a big challenge for our players due to the high level of quality and the number of games played in the two-day tournament.

“But our teams impressed with great organization on and off the pitch. All players showed excellent behavior and respect for all the referees, coaches and other players,” he added. “The results were very good, but the way that our teams played was the highlight of the tournament.”

The U11 boys got off on the wrong foot in their first match, losing to Singapore’s JSSL Arsenal Sanchez on a last-minute break-away goal, but rebounded to pick up 4-0 and 9-0 wins over Aksil Shanghai and Bangkok Soccer league.

The victories were highlighted by the performances of William Potter, a midfield master class from Rainer Oeijord, who tallied two goals and the powerful play of forward Lloyd Vidotto.

In the next game, FC Bangkok and BISP engaged in a defensive struggle that ended in a 0-0 draw. In the final match of the day, the boys from Phuket cruised to a 3-1 win over Delhi’s YFI Rovers. Jonah Duchowny’s 20-yard stunning strike was the pick of the three goals. The win lifted BIS Cruzeiro into second place in the league heading into the quarter finals.

“With our own Cruzeiro game philosophy, our teams played in a smart way, keeping the ball with quality, quick transitions, balance, and aggressiveness, while always looking to score,” Mr Candido explained.

The U11 BISP team jumped out to a 3-0 lead in the first five minutes against Gold Star Hanoi to start the second day of competition and held on for a 3-2 victory that put them in a semi-final match with JSSL Arsenal Wilshere.

“With an academy of more than 1,700 players and on a six-game winning streak their confidence was high,” Mr Candido noted.

JSSL took the lead on a close-range strike two minutes in, then BIS Cruzeiro countered when Joseph Hunter rounded the keeper for the equalizer. A James Hogan header off a corner by Duchowny rocketed Phuket into the finals and a re-match against JSSL Sanchez.

Another slow start by BIS Cruzeiro led to JSSL taking the lead until Hunter tied the score at 1-1 with a calmly placed penalty kick.

“Both sides had chances in the remaining minutes and tough tackling from Daniel Christensen and Luke Carrick, and a string of impressive saves from Theo McIntyre kept the score tied,” said U11 Coach Simon Bray.

The game moved into extra time and within minutes a break away attack saw Christensen pass to Carrick, who turned his man before laying the ball off to Hunter, who sent the winner home off his left foot into the bottom corner to secure victory and the championship.

The BISP U9 team took silver with an two-day overall record of 7-1, losing 2-1 in the championship match against JSSL Wilshere.

“The final game was a very tight, close game against a very strong and organized team,” said Coach Tim Pearson. “We took the early initiative with Oliver Mclean-High hitting the post in the opening minutes and other chances just slipping away from the team.

“The opposition then scored an unfortunate free kick from distance and then another goal to seal their win,” he added. “Overall, the weekend was an amazing experience for these boys who played their hearts out in every game. They conducted themselves as professionals at all times and played some beautiful football and all have very bright futures ahead of them.”