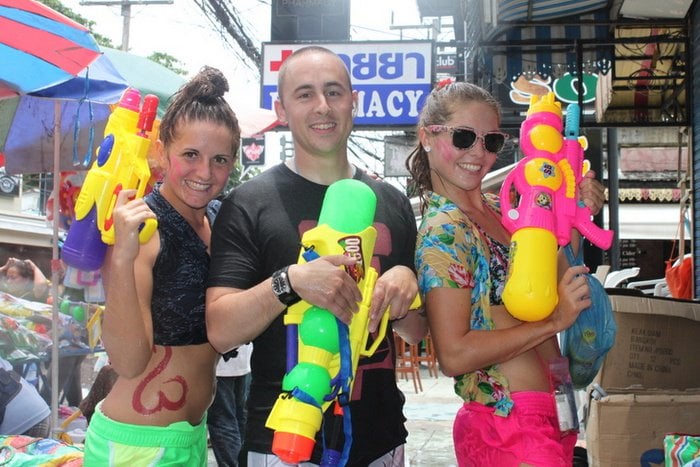 PHUKET: Police in Phuket targeted drunk drivers, arresting hundreds of people driving under the influence yesterday, while relaxing their efforts to enforce other banned Songkran activities, the Phuket Gazette was told today.

Prior to yesterday’s celebrations, a nationwide ban that Phuket police said that they would be strictly enforcing was put on sexy outfits, sexy dancing and rolling water-fight trucks. Also banned were the use of ice water and mixing either foam or powder with water for the festivities (story here).

“There were more than 100 drunk drivers arrested yesterday. However, we only made a few arrests of people taking part in other activities deemed inappropriate for Songkran,” said Phuket Provincial Police Deputy Commander Peerayuth Karajedee this morning.

“We understand the rules issued for the Songkran festivities. However, we don’t want the festival to look unhappy, so we didn’t enforce the bans too strictly.”

Col Peerayuth pointed out that though some activities, such as using ice water and powder, had been banned, they were not causing harm to anyone.

“We preferred to just warn them, rather than arrest them, as the infractions are not that serious – we want people to enjoy Songkran,” Col Peerayuth said.

The Gazette was told that Phuket City Police have yet to calculate how many alcohol-related arrests were made yesterday as they patrolled the Limelight Avenue and Saphan Hin play zones – where booze was banned.

“We will do a final tally tomorrow. However, we did arrest a few people for using powder and using pick-up trucks during the water fights,” Phuket City Police Deputy Superintendent Khunnadet Nanongkhai said.

“There were a few incidents, but we chose to just warn them rather than arrest them,” Chalong Police Superintendent Noppadon Thiraprawat said.

Though Songkran celebrations have gone smoothly thus far, Col Peerayuth said that his officers would continue to be vigilant.

“We will do our best to keep an eye on what is happening today. We want to ensure the island is safe and everyone is able to have fun throughout the entire festival,” Col Peerayuth said.