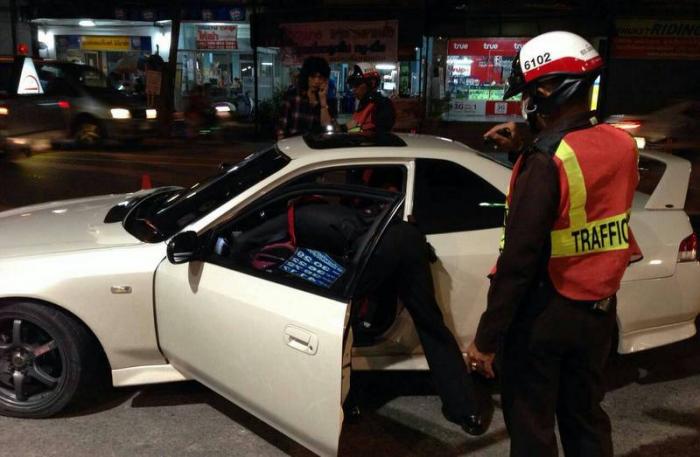 PHUKET: In line with national policy, Phuket’s top policeman vowed to impound drunk drivers’ vehicles during the Songkran ‘Seven Days of Danger’ road-safety campaign. Police will not return the vehicle until the end of the campaign.

“Impounding a vehicle and seizing a driver’s licence in a drunk driving case is nothing new – it’s just common sense,” said Phuket Provincial Police Commander Teeraphol Thipjaroen. “The National Council for Peace and Order’s announcement of the ‘No Drink Driving’ campaign just reinforces the idea that we must be very strict in our enforcement.”

The annual Songkran ‘Seven Days of Danger’ road-safety campaign will run from April 11 to April 17 this year, confirmed Sirisak Skoonsorutcha, chief of the Disaster Prevention and Mitigation (DDPM) Phuket Office.

Maj Gen Teeraphol pointed out to the Phuket Gazette that officers on the island have led a sustained battle against driving under the influence. As part of that battle, Maj Gen Teeraphol established drunk driving arrest quotas (story here).

Officers armed with an additional 39 breathalyzers that were donated to the province have been effective in their battle, smashing the quotas (story here). Michael Woodford, the executive chairman of the Safer Roads Foundation (SRF), and his wife Anunciacion Somavilla, presented the Lion alcolmeter SD-400 breathalyzers to then-Phuket Governor Nisit Jansomwong on August 27 (story here).

“We’ve been playing hard with drunk drivers for a long time now: seizing their vehicles, taking their licences, bringing them to the police station and sending them to court,” Maj Gen Teeraphol said.

In addition to the push against drunk driving, Mr Sirisak said that his officers would be launching an initiative expected to net at least 100 people in each sub-district of the island for failing to wear their helmets.

“The ultimate goal is to reduce the number of accidents and deaths on our roads,” Mr Sirisak said. “Enjoy Songkran, but drive safely and be responsible – and don’t forget that you’re sharing the road with others and need to keep them safe too.”

Frenchman, 23, stabbed to death in Phuket