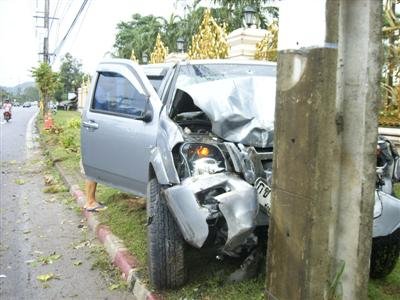 PHUKET: A businessman driving from Phang Nga to Phuket crashed his pickup truck in Thalang yesterday, taking out six small roadside trees before finally crashing into a power pole.

Thalang Police were notified of the accident just after 10am.

At the scene, in front of the Yee Teng Mansion on Thepkrasattri Road near the Isuzu dealership, police and rescue workers found the driver with bruises and minor abrasions, but no serious injuries. There were no passengers in the truck at the time.

Kusoldharm Foundation workers gave Mr Methee first aid treatment at the scene before taking him to Thalang Hospital, where he was treated for the injuries.

Mr Methee told Thalang Police he was in Phuket on business when he lost control of the vehicle.

Rescue workers at the scene said that although the crash happened at a notorious U-turn area, there were no other vehicles involved.

It was not raining at the time but the road was wet from a previous downpour, they said.

Although the front of the vehicle was badly damaged, Mr Methee was spared more serious injury because he was wearing a safety belt and his air bag successfully deployed, they added.

However, Mr Methee will face charges for damage to state property, including the destruction of six roadside trees, police said.

The area in front of the Yee Teng mansion is one of many dangerous U-turns on Thepkrasattri Road.

Others, including the Super Cheap U-turn in Rassada and the Bang Khu U-turn in Koh Kaew, have been closed off by authorities due to the high number of accidents that occurred, many of them fatal.