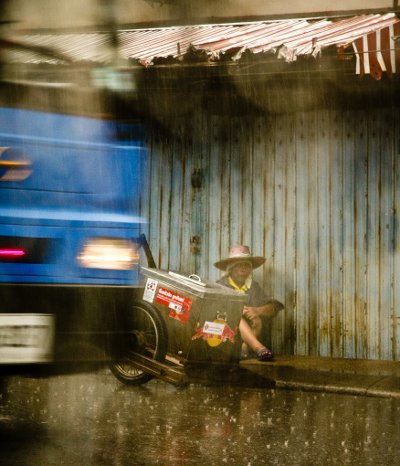 True to the nickname, in the 24 hours preceding 7am today the MET recorded heavy showers across the region.

Although official monitoring stations in Phuket Town and at Phuket Airport recorded just 28.4mm and16.6mm respectively, deluges were reported in many parts of the island.

As much as 60mm of rainfall fell at Takuapa, just north of Phuket, and 35mm fell in Ranong.

The MET also recorded 53mm of rainfall in a single day as far south as Trang Airport.

The forecast for Phuket and the surrounding region for the next 24 hours calls for more widespread thundershowers and isolated heavy rain, especially in Ranong and Phang Nga. Southwesterly winds will gust from 20 to 40kmh, pushing wave heights to two to three meters.

Next month is expected to bring more of the same. The MET predicts that rain will fall on 18 to 22 days in August, bringing an estimated 350-400mm of rainfall.

The large volume of water that falls on Phuket at this time of year has a profound effect on the vegetation, prompting some people to prefer the moniker “the green season”.

For the love of dolphins: NGOs to launch heated campaign in Phuket