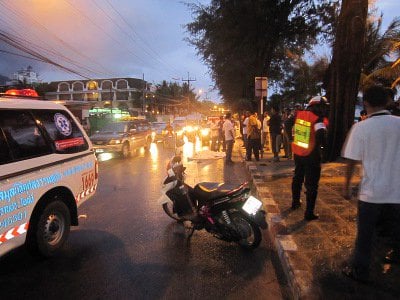 PHUKET: The driver of the six-wheeled truck that struck and killed 27-year-old resort worker Arayada Budsayakul on the Patong beach road last month has been charged with reckless driving causing death.

Ms Arayada was four months pregnant when she died in the accident on November 8.

“He has confessed to the charge. I am compiling the paperwork now to file with the court,” he said.

Lt Patapee explained that Rattana was charged immediately after the incident, but the delay in processing the criminal charge came at the request of Ms Arayada’s family.

They wanted Ms Arayada to be cremated first and for the family to discuss the incident with Mr Rattana before criminal charges were placed against him, Lt Patapee explained.

During discussions with the family, Mr Rattana agreed to pay 500,000 baht to the family.

One of the witnesses to the accident told the Gazette, under the condition of anonymity, “The truck was packed with Burmese laborers. It clipped Arayada’s motorbike while she was driving slowly in the left lane waiting for the truck to overtake her.”

The motorbike fell to the ground, spilling Ms Arayada into the path of the truck’s back wheels, he explained.

“As I was a witness to the accident, I went to the police station to give a statement. While I was there I saw the driver. He appeared to be about 40 years old. He had just taken an alcohol breathalyser test,” the witness said.

Mr Rattana, who did not flee the scene, was found not to be under the influence of alcohol and was released without bail, confirmed Lt Patapee.

Speaking about the accident, the witness added, “Arayada’s friend was following her on another motorbike and saw the accident happen. She was in shock. She told me that she and Arayada worked in The Kee Resort & Spa. She also told me that Arayada was pregnant.”

One of Ms Arayada’s co-workers at the resort told the Gazette, “Arayada was a nice woman and a good worker.

“We are all very sad about this,” he added.