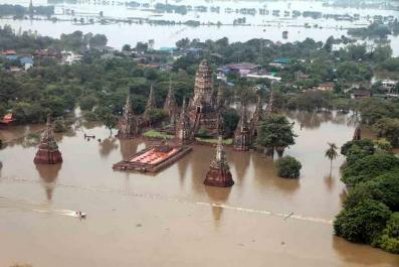 The death toll from months of severe flooding across Thailand has reached at least 740, the country’s Disaster Prevention and Mitigation Department reported on Friday.

About 3,652 villages in 80 districts of nine provinces in the upper part of the country are still suffering from the flooding, according to the Bangkok Post. As of Friday, at least 730 people have been killed in this region and three others remain missing.

In the southern region of the Asian country, flooding has affected about 2,057 villages in 65 districts, causing extensive damage to farm land and public facilities. The death toll in the southern provinces is at least 10, summing up to a total of 740 fatalities across the country.

Last week, the government of Thailand approved a Bt 20 billion ($648.5 million) budget for the country’s post-flood reconstruction efforts. Among the restoration targets is the Don Mueang Airport as well as roads, educational institutions, government offices and religious and historical sites across the country.

Thailand has been hit by unusually heavy monsoon rains since July, causing at least 1.4 trillion baht ($44.6 billion) in damage. The country was also hit by severe flooding in the southern region in April in May, causing damage to its fishing industry, industrial sector, tourism, and business and trade, among other areas.

Late last month, the Thai government forecast that this year’s flooding will likely slash the country’s economy by around 1.2 percent.

The Criminal Court yesterday sentenced a man to 18 months in prison for stealing 25 pairs of shoes from a flood victim.

Supatpong Phosakha, 52, pleaded guilty to stealing 25 pairs of shoes from a flood hit police flat in Bangkok’s Bang Khen district on the night of November 8. The shoes, worth 6,120 baht altogether, belonged to Witoon Bamrungkul.

Supatpong was arrested the following day with a sack containing the shoes in his possession.

After convicting him, the Criminal Court commuted his three year term to 18 months in recognition of his confession.

“We will have the whole capital dry before the end of this month,” Bangkok Governor MR Sukhumbhand Paribatra said.

Sanya Sheenimit, who heads the Bangkok Metropolitan Administration’s Department of Drainage and Sewerage, said the construction of a concrete embankment along Maha Sawat Canal would be completed quickly and that it would be 3 meters high, not 2.5 meters as initially planned. The barrier is expected to play a crucial role in preventing flooding in western Bangkok next year.

“The height of key roads in the western zone such as Phutthamonthon 3 Road will increase by between 30 and 40 centimeters, too, because these roads can serve as embankments,” Sanya said.

According to the Disaster Prevention and Mitigation Department, 621,355 flood hit families in 30 districts of Bangkok are eligible to claim 5,000 baht compensation from the government. To qualify, homes must have been flooded for more than seven consecutive days.

Meanwhile, the Metropolitan Waterworks Authority (MWA) is providing free counseling and free water leakage checks at homes of flood victims in Bangkok and its vicinity.

“You can request help by calling 1125 round the clock,” MWA assistant governor Ulysh Makmaitree said.

The 24/7 Emergency Operations Center for Flooding, Storms and Landslides said floods had ravaged about 12.61 million rai of farmland, 215,719 rai of fish farms, and 53,567 rai of crab/clam farms this year.