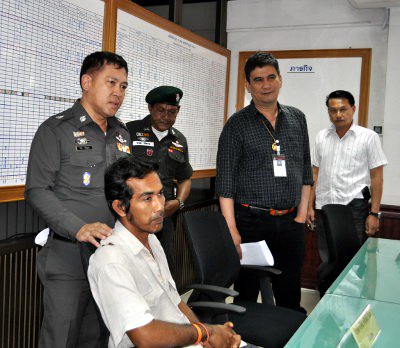 PHUKET: Police in Phang Nga have arrested the mastermind behind the triple-homicide that took place outside a Krabi mosque on Sunday night.

The suspect confessed to organizing the massacre. He said the attack was revenge for “insults” the targets had made about his brother after defeating him in a local election.

Police tracked down Abedin to a location in Phang Nga, where he went into hiding after the attack.

Under questioning at Region 8 headquarters in Surat Thani, Abedin revealed the identity of one of his two accomplices as 38-year-old Noppakhun Yongbud of Ao Luek District in Krabi, where the attack took place.

Abedin claimed he did not know the name of the third man that took part in the attack.

Abedin confessed that the trio used an automatic assault rifle and a pistol to kill victims Prasit Somden, Salae Khonruen and Saeng Lao-udom. Three others were also injured in the attack, two seriously.

The apparent main target of the attack, new Village 2 headman Donlorrak Khonlian, was only slightly injured by a bullet that grazed his right arm.

“I got upset that they insulted my brother, who lost in his bid for re-election as village chief, so I asked my friend to help me take revenge,” Abedin said.

Police are still hunting for the two other men who took part.