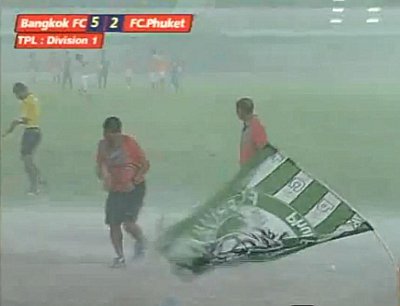 PHUKET: FC Phuket was enduring a 5-2 drubbing by Bangkok FC in the capital on Sunday when the match was abandoned seven minutes before full time due to a freak storm that made play impossible.

There was some confusion over what the ruling meant for the fixture.

Bangkok FC, currently languishing third-from-bottom in Thai Division 1, has asked that the final minutes of the game be played in Phuket in October, when the two sides are scheduled to meet at Surakul Stadium in Phuket Town.

Although replaying the remaining minutes of a fixture at a different ground would be almost unprecedented in world football, Bangkok FC, nicknamed the “Iron Bulls”, said they preferred the move as it would “save money for all sides”.

The Thai Premier League (TPL) is considering the proposal and is set to report its decision very soon.

Not including Sunday’s game, both the Phuket’s “Southern Sea Kirin” and Bangkok FC have played eight games so far this season.

According to the TPL official table, Phuket is in sixth place in Division 1 with 14 points, two points below Bangkok United, which has played 10 matches.

On Sunday the Southern Sea Kirin play at home against Thai Honda, currently 15th in Division 1.

To watch all the goals in Sunday’s match and footage of the downpour that ended it, click here.

Other Thai Division 1 matches played over the weekend:

Phuket Fun Fly is back

Case of the crabs: Phuket expert speaks out