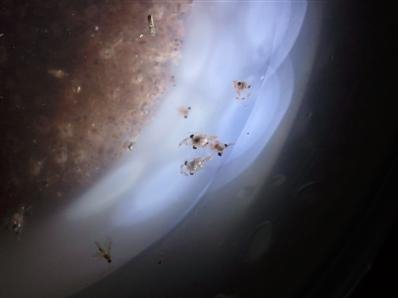 PHUKET: The Phuket Marine Biological Center (PMBC) has identified overfishing as a likely cause of the millions of crab larvae washing ashore on Phuket beaches on Friday.

The tiny sea creatures that washed ashore at Kata and Karon Beaches were crabs, not krill as originally reported, explained PMBC Director Wannakiat Thubthimsang, who took live samples from the beach on Friday.

“They are baby sea crabs, but we’re not sure what kind. It’s obvious they live in the sea, not on shore, as their last pairs of legs are for swimming – not for walking like the legs shore crabs have,” he said.

“The crabs are in their megalopa period; about 29 to 40 days old. Their carapaces [“bodies”] are two to three millimeters wide and about 1mm long, but we cannot tell what kind of crabs they are,” he added.

Mr Wannakiat explained that a mature female crab produces up to 300,000 eggs at a time.

“So if many female crabs lay eggs at the same time, millions of larvae will be produced,” he said.

“During this megalopa period, these larvae serve as a major source of food for fish. We expect that overfishing is why so many of them survived,” said the marine biologist.

“Regardless, we are checking oxygen levels and other sea water quality indicators to ensure everything is normal in that area,” he added.

“It certainly was not a sign of any impending disaster,” Director Wannakiat said.

Crab larvae lack the kind of neural development needed to detect, let alone act upon, the kind of sound waves that could be a precursor to a tsunami, he said.