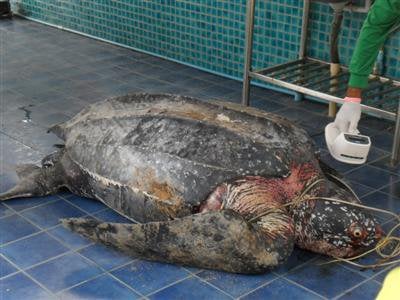 The death comes amid what one expert has described as a “crisis” for the endangered species.

The body of the turtle, estimated at between 15 and 25 years old, was discovered floating in mangrove forest by residents of the Bang Hon Sai Thong residential estate in Rassada subdistrict.

The villagers hauled the carcass onto the beach and alerted officials from the Marine Endangered Species Unit at the Phuket Marine Biological Center at Cape Panwa.

The animal had large wounds to its front legs thought to have been made by fish hooks. A large cut in its mouth was also consistent with entanglement with a fishing line.

The officers loaded the heavy creature onto a truck and drove it to the PMBC for further examination.

The body, weighing 196 kilograms, had a circumference of almost three metres. Officials estimated it died no more than two days before its body was discovered.

PMBC director Wannakiat Tubtimsaeng said the turtle was of mating age and it was likely swimming ashore to lay eggs on one of Phuket’s beaches.

However, the area where the turtle was found was not a place where leatherbacks traditionally laid eggs.

The most common nesting spot is Mai Khao beach in Thalang district.

Leatherback turtles have also been known to lay on other west coast beaches including Kata, Karon and Patong.

Fishermen apparently pulled the creature onto a boat to disentangle it before throwing it back into the sea in Klong Tha Cheen. The animal was found several kilometers upstream, not an area where pelagic sea turtles like the leatherback would normally venture.

The official cause of death will be determined pending a full autopsy, he said.

Mr Wannakiat said the situation looked grim for turtles in Phuket this season, with no turtles of any type laying eggs on any beaches so far. In particular, no leatherbacks have been seen laying eggs anywhere along Thailand’s Andaman coastline.

He called the situation a “crisis” for the population of leatherbacks, the most endangered species of turtle in the region.